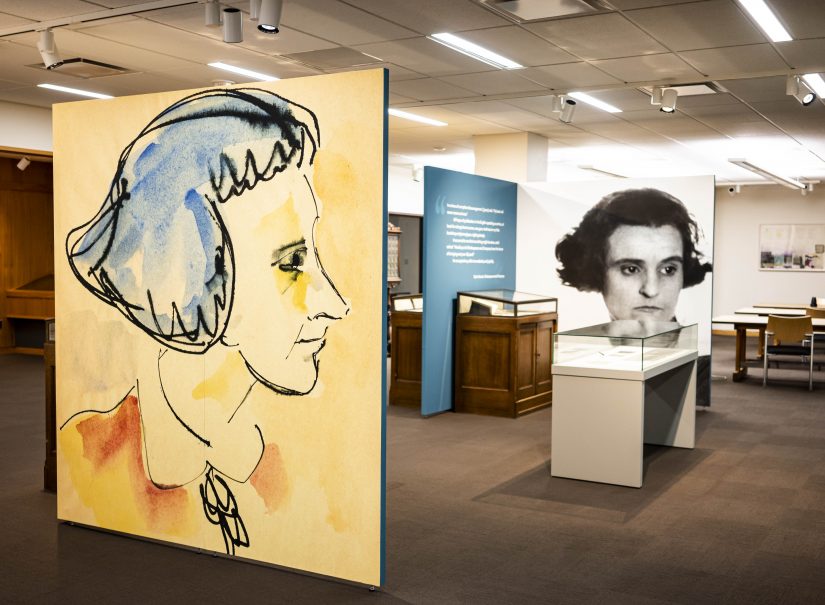 The Poetry Collection is pleased to announce its new exhibition, “That all books might published be”: Sylvia Beach’s Ulysses. This exhibit celebrates the centenary of Ulysses by James Joyce through highlighting the contributions of its publisher, Sylvia Beach. Published by Beach’s imprint Shakespeare and Company on February 2, 1922—Joyce’s 40th birthday—Ulysses is widely considered to be one of the most influential books published in English in the twentieth century. UB’s Poetry Collection is the home of the world’s largest and most comprehensive James Joyce Collection, and this exhibit features many rarely seen items from the collection, including ephemeral material related to Shakespeare and Company Lending Library, production and distribution materials related to Ulysses, and materials documenting the book’s piracy in Two Worlds Monthly and U.S. censorship, including Beach’s personal copy of the first authorized U.S. edition, published by Random House in 1934 and inscribed to her by Joyce. 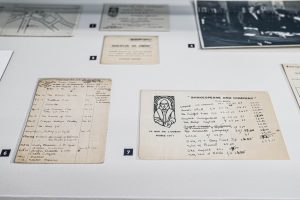 The exhibition’s title comes from a poem Joyce wrote to Beach in gratitude for her efforts in publishing his book. As Beach memorably relates in her memoir Shakespeare and Company, Joyce had despaired of ever finding a publisher for Ulysses due to the novel’s censorship when it was serialized in The Little Review. When no publisher would take on the book, Beach offered to publish it through Shakespeare and Company, her lending library and bookshop that had become a home to members of the expatriate group now known as the Lost Generation. Guided by her partner Adrienne Monnier, whose French-language bookshop and imprint La Maison des Amis des Livres was an inspiration for Beach, Beach and Joyce designed a prospectus for Ulysses; created a publication plan; coordinated with Monnier’s printer, Imprimerie Darantiere in Dijon; and distributed the novel—and later fought against its piracy and censorship. As Beach’s New York Times obituary noted, “Few literary associations have been more important than that of Miss Beach and Joyce.” 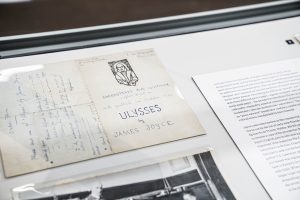 Beach was not only the publisher of Joyce and proprietor of Shakespeare and Company, she was also an archivist of her own work, saving everything from Joyce’s manuscripts, typescripts, and correspondence to the order forms subscribers used to reserve copies of Ulysses as well as Joyce’s handwritten designs for the book’s cover and front matter. Beach chose UB as the home for her collection, which arrived in two acquisitions in 1959 and 1962 thanks to the hands-on negotiations and financial commitment of Walter and Constance Stafford, as well as support from Mrs. Spencer Kittinger and the Friends of the Lockwood Memorial Library, joining materials from Joyce’s family and B.W. Huebsch, Joyce’s U.S. publisher. Of the acquisition of her collection by UB, Beach explained in 1959 to Oscar Silverman, then Director of the Libraries and Professor of English, “I am so glad to think that the University of Buffalo is to be the centre for the study of Joyce’s work.” It is in part thanks to Beach that the UB James Joyce Collection is so significant. 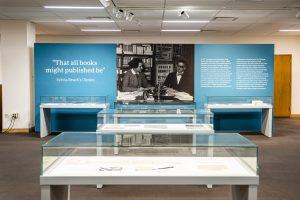 “That all books might published be”: Sylvia Beach’s Ulysses will be on display in 420 Capen Hall through the end of December 2022. It is open to the public during the Poetry Collection’s regular hours, Monday through Friday from 10am to 4pm (with some exceptions). For more information, contact lpo-poetry@buffalo.edu or call 716-645-2917.