The University of Buffalo planted the lvy at Cambridge on Saturday, September 27 – and they planted it in the rain and mud with a 6-3 victory over Harvard University.

The more than 1,000 U.B. rooters,led by Chancellor and Mrs. Furnas, who made the trip, had plenty to cheer about when Joe O’Grady blocked a Crimson punt and co-captain Nick Bottini grabbed it in the end zone for the tally. This proved to be the margin of victory for the fighting Bulls in their finest football hour to date.

The Bulls had plenty of desire or heart, or intestinal fortitude, or whatever you want to call it when you win a ballgame like the one played in Harvard Stadium that day. 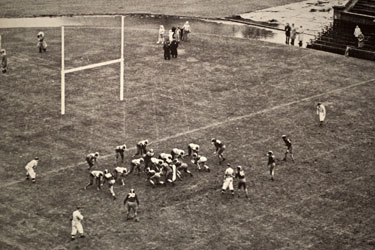 Even the most rabid U.B. supporter thought Harvard a little too tough for the Bulls, especially with the series of injuries that befell Buffalo during fall practice. But the toughness was all Buffalo. Out gained 211 yards to92 (177 to 46 on the ground) and 16 first downs to 6,the Bulls were just too tough when it counted. Time and time again the Crimson moved toward the goal line only to be frustrated in an attempt to score any more than a field goal they made in the first quarter.

There were no individual heroes for the Bulls. Coach Dick Offenhamer praised the entire team for its showing against the “sleepers” of the Ivy League. Of course O’Grady and Bottini were in on the scoring play and no one can take that away from them. But there were others who are worthy of mention.

Sophomore quarterback Gordon Bukaty from Lackawanna was praised by his coach for “calling the plays well, taking charge and running the club well.” Bukaty found out the morning of the game that he would start at quarterback. He called the quick kick which was the turning point of the game. Offenhamer said he would have called the same play.

The kick came at the start of the fourth quarter when fullback Bill Brogan punted from the Buffalo 37, 55 yards to the Harvard 8 where the ball rolled dead. Brogan was a leading ground gainer for the Bulls and also played a fine game on defense.

The most thrilling moments of the game, other than the scoring play, occurred at the very end of the fourth quarter. After Brogan’s quick kick to the Harvard 8, the Crimson marched to the Buffalo 17 yard stripe aided by two 15 yard penalties. The Bulls held but Harvard took over again on a recovered fumble on the Buffalo 39. This time Harvard matched to the 6 and that was all. Bukaty ran one play and the game ended. Buffalo 6, Harvard 3.

There is no doubt about the importance of this game. It vaulted the Buffalo gridders into national prominence. It is a great boost to the team, the coaching staff, alumni and the University.

Saturated by the sheets of falling rain before, during and after the game, the loyal Buffalo boosters who made the Harvard trip could be heard to say over and over again, “It’s a beautiful day.”