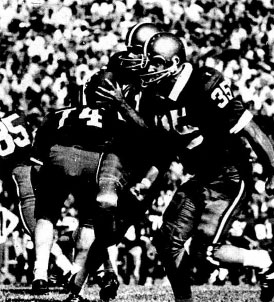 It was ten years ago that the U/B Football Bulls stepped into the realm of major, or University Division, football. The Bulls, playing against College Division competition had posted two straight 8-1 records and had won a Lambert Trophy in the process, so the plotters of U/B s football fortunes felt the Bulls were ready for the step-up.

Now, ten years later, the Bulls are playing as if they plan to return to scheduling schools like Carnegie Tech and Lehigh. Their 1-6 record as they prepare to host Holy Cross in a televised game Saturday is the worst at this point in any season since 1954. That year the Bulls lost their first six games, and finished 2-7. They lost that year to powers like Hobart (45-0) and Brandeis (52-20). The Bulls’ worst record as a University Division team was 4-6 in 1960 when they played Army and Virginia Military Institute.

Why have U/B’s football fortunes fallen, and where are they headed?

Bob Deming, U/B’s head football coach, thinks the program might be on the way back. “I wouldn’t be here if I didn’t think we’re improving,” he said. “We were lucky for a while, but the breaks have finally caught up to us. Our bad season is showing us what our weaknesses are.”

What are weak points of the team and of the entire athletic program here?

First of all there is personnel. “We can’t get the blue-chip players right off the bat,” Deming complained. “There are so many other schools for them to go to.”

But a coach has to work with the talent at hand, and this year’s players aren’t producing. “Good errorless ball” is what Deming looks for, and isn’t getting.

Besides, as Dr. Fritz pointed out, “The boys don’t like playing before small crowds” and the team’s home crowds this year have been small. An average of 2,069 students saw the Bulls’ first four home games, an improvement over last year’s 1,872, but hardly in the range of most major colleges.

A good crowd for the television cameras on Saturday, say 10,000, would be an improvement, but it is not too likely. An indication of that was shown by Ed Brown, a student who tried to organize a card section for the game. He needed 300 people. Thirty signed-up.

The Athletic Department’s financial situation is none too good, either. The Department operates on an annual budget of about $350,000. Many large schools have budgets of $1 million, and Dr. Fritz points out that budgets of $3 million are not uncommon.

The bulk of the Department’s revenue, about $250,000, comes from mandatory student athletic fees. That money leads a minute-to-minute existence, since a student referendum could change or eliminate it.

How will the Department continue or improve its operations if anything happens to student fees?

“We’re just going to have to look for other sources of revenue,” Dr. Fritz answered. These other sources might include Day Camps, such as the football staff held last year, vending machine revenue (which funds the University of Massachusetts’ athletic program), and facility rental fees.

One solution to bigger crowds and enlarged support would be to schedule more attractive opponents. But football schedules are made seven to ten years in advance, and the schedules for the next few years were drawn up in the mid-sixties, when student athletic fees were undergoing scrutiny. The administration then couldn’t risk scheduling top competition for the Bulls, if there would be no money to bring in those teams. The schedule for the next few years is being made now, and at this late date can’t include the strong opponents wanted.

The most obvious draw, of course, would be a good U/B team. And the football staff feels they will have one next year. Nine of 11 starters on defense will return, but only about four on offense. (The coaches aren’t sure yet about a few players.)

This loss on offense will have to be filled largely by freshmen, and this year’s freshman team is probably the best in the school’s history.

Back to Saturday’s game, Holy Cross’ record is 0-6, the only team the Bulls face this year with a record worse than theirs. Holy Cross’ entire team was felled by a hepatitis outbreak last fall, and their football program hasn’t recovered. Since I960, the Crusaders have lost ten games in a row.

It’s too late for the Bulls to finish with a winning record.

But if the Bulls play good ball Saturday, as they did the second half of last season, then Deming’s faith in them will be justified. If not, hand them a blindfold, and hope they go quietly.