The article below first appeared in the January 29, 1971 issue of the Spectrum Newspaper. 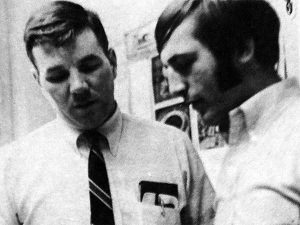 When the abolition of football at Buffalo became nationwide news, head coach Bob Deming was stunned. Deming, who knew of plans weeks before, said: “I wasn’t mentally prepared for the decision. I thought someone would formulate a plan to keep football going. I certainly wasn’t looking for a job.”

Yes, Coach Deming’s reaction sums up the reaction of many, but as Buffalo’s head coach from 1969-1970, Deming was stung hardest by the decision. “I took it like a death in the family,” a glum Deming reported.

A 1957 graduate of Colgate University and a Buffalo defensive assistant for ten years, Deming has suddenly seen the light of his flickering football program extinguished.

Deming’s immediate concern after the official announcement was in stabilizing the situations of his eight associate coaches and numerous players. Deming, who received a three-year coaching contract in December, 1969 remarked: “We have not placed any of our coaches as of yet, but it could be into April before we know. After all, we’ve only been on the coaching market for two weeks, and there are very few openings.” However, two days after this interview, Irv Wright landed a job at Toledo. As for the players, Deming reports that consultations are being held in order to aid the players, whatever their future plans are.

Long an advocate of a new stadium in Erie County, Deming often compares Buffalo’s football program to the University of Houston’s at a similar stage in 1964. Deming noted that Houston’s attendance doubled after one year in the dome and has steadily risen since. Deming remarked: “A dome stadium in Buffalo would have been our salvation. We would have been able to increase our guarantees to opposing teams and could have brought in such teams as Army, Syracuse, Miami, Florida and Tulane.”

Concerning the new University campus at Amherst, Deming admitted: “I can’t imagine the new campus without intercollegiate football. I am a firm believer in the values of intercollegiate athletics.”

On the subject of the lack of State University of New York support for intercollegiate football, Deming said: “The SUNY system is behind the times even in education. The high echelon of the SUNY should have been eager to see intercollegiate football here. What they have done is to bring us down to the level of mediocrity of the rest of the system. It seems ironic that Albany was without football until starting it last year, and here we are, the biggest school in the system at the other end of the state, dropping the sport.”

When questioned about the future of collegiate football, Deming admitted that stricter control as to the number of scholarships awarded should be initiated. Deming also rapped the “elitist coaches who control the NCAA” and reported that only 60 of 118 so-called big-time football teams made money last season.

Coach Deming also admitted that he’d like to get back into coaching, preferably in the East. Buffalo’s mentor, also the associate director of athletics said: “The loss of football cannot help the total program – football was the guts of the overall program.”

Looking back on a career is often difficult for a young coach, but the 36-year old Deming listed his three greatest moments as a coach. “our wins over Boston College and Villanova in 1969 were great thrills, but victories over Colgate in 1965 and Ohio University in 1963 were just as thrilling.” The man who could never turn down an interview request and who compiled an 8-12 won-lost record as head coach still has minor hopes that the program can be saved. Deming said: “I’ve tried to resolve myself to the situation, but my mind is now like a yo-yo.”

Summing up his brief career as Buffalo’s 15th head football coach, Deming remarked: “Our main problem was that the right people weren’t sold on football. Every day brought a crisis somewhere in the program, but I stayed on in spite of it.” Dedicated educators like Bob Deming are hard to find, and it is certain that all who knew the Coach hope that a more stable future awaits Bob Deming, his wife, Jean and his daughters, Laura and Leslie Ann. As the signs says in the football office: “Don’t raise your son to be a football coach.”