The article below first appeared in the October 4, 1971 issue of the UB Spectrum. 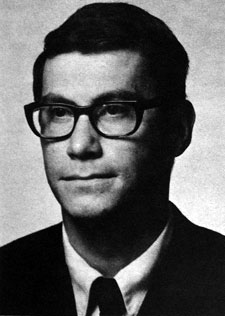 If variety is the spice of life, the Bulls inaugural club soccer team is a guaranteed success in its first season. Seventeen Americans and nine foreigners combine to form the roster in the club’s initial season.

An important part of any soccer teams’s success is its ability to prevent the opposition from scoring goals. A good goalkeeper is thereby necessary, and Coach Bert Jacobsen thinks he has found the right man in Tahm Sadeghi. Sadeghi has been away from the game for a few years since coming to the U.S. from Tehran, but has shown excellent potential in practice thus far. Sadeghi’s main weakness is on low shots, but Coach Jacobsen expects him to be in top form for the season’s opener tomorrow at Geneseo State.

Along with the goalkeeper, the fullbacks are the key to any soccer teams’s defense. Additionally, the fullbacks have the responsibility of initiating the offense from their position in front of the goalie. One of the key players manning the crucial fullback position will be Chip Gallaghar, an ex-varsity basketball player for the Bulls. Coach Jacobsen sees great promise in Gallaghar and commented: “He seems to improve every day. With a little more experience he can be the type of steady player that we need.” At the other fullback slot Gordon McKinnon has impressed with his hard-nosed, aggressive style of play.

The halfback in soccer must run the offense. The Bulls have several top candidates at halfback including Mark Wigtil, who has hustled his way onto the starting lineup. The other Buffalo halfbacks will be Bob Hayes (no relation to the Cowboy receiver), the Bull best defense player, and Jim Leinert at center halfback. According to Coach Jacobsen, “Leinert seems to always be in the right place at the right time.”

A soccer team can have a good defense and a hustling offense but it still needs players to put the ball in the opposition’s net. For the Bulls, an all foreign front line led by Alex Torimiro will attempt to put Buffalo on the scoreboard. Torimiro has shown excellent touch so far, as has Nigeria’s Adedoyin Kuti, who’ll start at center forward. Flanking Kuti will be Koda Osensi (Nigeria) and Dave Afrasiabi (Iran). Commenting on Afrasiabi’s recent play, Coach Jacobsen remarked: “Dave showed potential all along, but just hadn’t realized it. I think that he has finally shown what we expected.” The basis for Jacobsen’s optimism came when Afrasiabi booted home four goals in the last intra-squad scrimmage.

All in all, the Bulls have a young squad which figures to improve with experience. It is hoped that the Bulls will be ready when they return home to Buffalo for their Oct. 13 opener against Fredonia on campus. A successful eight-game season would be a major step towards varsity status in 1972.