The article below first appeared in the Friday, November 9, 1962 issue of the UB Spectrum. 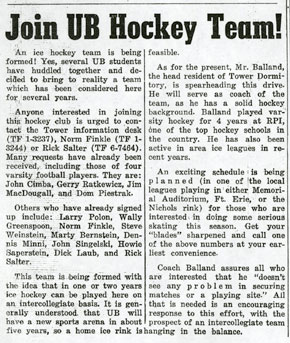 An ice hockey team is being formed! Yes, several UB students have huddled together and decided to bring to reality a team which has been considered here for several years.

Anyone interested in joining this hockey club is urged to contact the Tower information desk (TF 1-3237), Norm Finkle (TF 1-3244) or Rick Salter (TF 6-7464). Many requests have already been received, including those of four varsity football players. They are: John Cimba, Gerry Ratkewicz, Jim MacDougall and Dom Piestrak.

This team is being formed with the idea that in one or two years ice hockey can be played here on an intercollegiate basis. It is generally understood that UB will have a new sports arena in about five years, so a home ice rink is feasible.

As for the present, Mr. Balland, the head resident of Tower Dormitory, is spearheading this drive. He will serve as coach of the team, as he has a solid hockey background. Balland played varsity hockey for 4 years at RPI, one of the top hockey schools in the country. He has also been active in area ice leagues in recent years.

An exciting schedule is being planned (in one of the local leagues playing in either Memorial Auditorium, Ft. Erie, or the Nichols rink) for those who are interested in doing some serious skating this season. Get your “blades” sharpened and call one of the above numbers at your earliest convenience.

Coach Balland assures all who are interested that he “doesn’t see any problem in securing matches or a playing site.” All that is needed is an encouraging response to this effort, with the prospect of an intercollegiate team hanging in the balance.