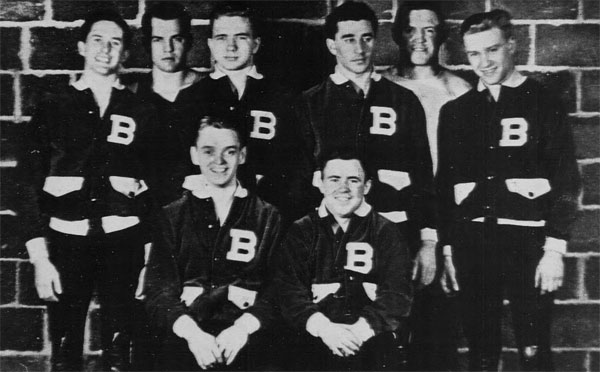 Local athletic stock soared to a new high this season when the University of Buffalo wrestling team put themselves literally and figuratively on the mat! Coach Andy Lehr (a Lehigh graduate) and captain Bob Rich (merely a local lad) spent many an hour with the grunt and groan artists who reported regularly about twenty-five strong.

The season opened on January 10 at the Elmwood Music Hall before a howling audience of 600 people. These matches were merely elimination bouts for the purpose of selecting a team to oppose Alfred on January 13. Those selected were : Serusa, Bardol, Seubert, Pusateri, Rich, and Zuk. P. S.- The Buffalo grapplers threw the Saxon warriors to the tune of 21- 15.

On February 9 the wrestlers took a severe shellacing from Colgate. 38-0. Nothing more to say-but better luck next time, Bisons!

The wrestlers were handed their second setback on February 26 at Cornell. Score – 23-15. (P.S. – Rich got married.) Notice – wrestlers pickup – lot of them thrown around too! This match wrote finis on the season’s wrestling card. With a year’s expenence under the belt, we’re looking forward to a high-class, tip-top wrestling team next year.