Pssst! New book by Barbas at the Law Library

The Law Library has received a new book by Professor Samantha Barbas, Confidential Confidential: The Inside Story of Hollywood’s Notorious Scandal Machine. 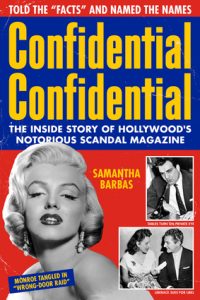 Chicago Review Press’s overview notes, “In the 1950s, Confidential magazine, America’s first celebrity scandal magazine, revealed Hollywood stars’ secrets, misdeeds, and transgressions in gritty, unvarnished detail. Deploying a vast network of tipsters to root out scandalous facts about the stars, including sexual affairs, drug use, and sexual orientation, publisher Robert Harrison destroyed celebrities’ carefully constructed images and built a media empire. Confidential became the bestselling magazine on American newsstands in the 1950s, surpassing Time, Life, and the Saturday Evening Post. Eventually, the stars fought back, filing multimillion-dollar libel suits against the magazine. The state of California, prodded by the film studios, prosecuted Harrison for obscenity and criminal libel, culminating in a famous, star-studded Los Angeles trial. This is Confidential’s story, detailing how the magazine revolutionized celebrity culture and American society in the 1950s and beyond. With its bold red-yellow-and-blue covers, screaming headlines, and tawdry stories, Confidential exploded the candy-coated image of movie stars that Hollywood and the press had sold to the public. It transformed the Americas from innocents to more sophisticated, worldly people, wise to the phony and constructed nature of celebrity. It shifted reporting on celebrities from an enterprise of concealment and make-believe to one that was more frank, bawdy, and true. Confidential’s success marked the end of an era of hush-hush—of secrets, closets, and sexual taboos—and the beginning of our age of tell-all exposure.”