Of Athletics in the University of Buffalo

The essay “Of Athletics in the University of Buffalo” seen below, first appeared in the 1924 issue (Volume 15) of the Iris Yearbook.

Of Athletics in the University of Buffalo

Athletics in the University of Buffalo, assumed definite form just thirty years ago.

It’s history has been one of alternating successes and disappointments. The one constant thing about it is, the fact that any successes which have been attained has been the result, just as it is today of tremendous sacrifice and effort on the part of a few real men, who have had the interest of “Our Alma Matter” and her activities at heart.

Football was apparently the first organized sport to be started in 1894, there was organized a team of mediocre calibre. This team was beaten, so the story goes, by every high school in the city and surrounding territory. The idea of a football team was started in 1893, but, did not amount to anything, except created a small amount of interest. 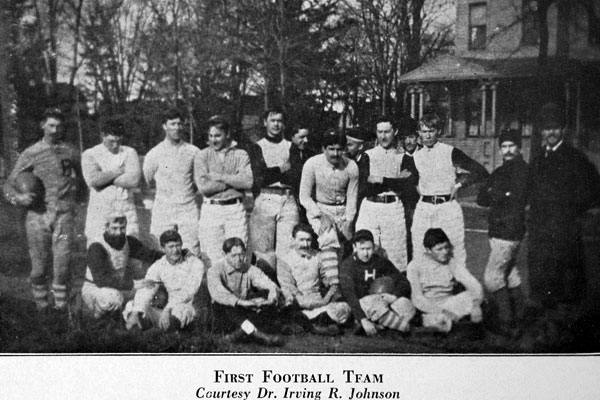 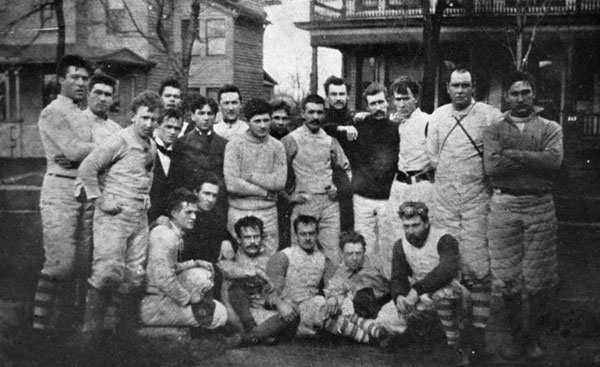 In 1894, there was a Football Athletic Association formed, which had Dr. James B. Croffs as President, Drs. Fred Busch (now deceased) and Jacob Otto as Secretary and Treasurer. The football team was composed of Drs. James B. Croffs, Irving Johnson, U. B. Stein, Donahue, William Potter, Guy McCutcheon, Brendel, Ayers, Boswell, St. John Green, Barnsdell, “Dinky” Johnson, Peterson, Metz, Lane, Granger and Hayes. This team practiced at Brown’s Riding Academy on East North street and also at John’s Riding Academy on East Utica street. Dr. U. B. Stein was captain, T. C. Moore of New York city was manager. The first game was played in the old baseball park in East Ferry street.

Captain Stein, remarked just recently that this team had the unique distinction of being very altruistic, “It always let the other team win.” This team was a pioneer, who laid a real foundation, for about three or four years later, we find the University of Buffalo Football Team bad become one of the foremost in the country. In the years 1898, 1899, 1900 and 1901, they lost one game each year or four games in four years. During these years, they played Syracuse, Cornell, Union, Hamilton, Case, Western Reserve, Columbia, Rennssaeler Polytechnic Institute, Duquene county, Athletic Club, All Buffalo, etc. After this period of success the teams began to retrogress because of the lack of support on the part of both faculties and student body. There was a period from 1902 to 1915 when the University of Buffalo could boast of no football team. 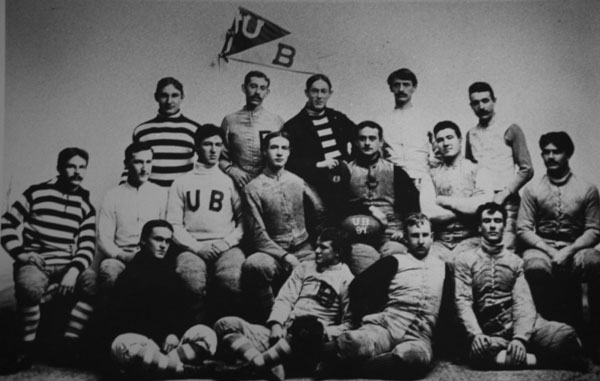 In 1915 interest was again aroused and Frank Mt. Pleasant, was engaged as a Coach and the team was a creditable one. From 1916 to 1921 Art Powell was Coach. During this period the year 1918 was probably the most notable, one due to the fact that the S. A. T. C.. commander ordered the football candidates to appear for practice at a certain hour, about three o’clock each afternoon. This resulted in a large squad and plenty of practice, and these things with one other thing, that of a competent coach, resulted in producing a very successful team.

Football was not the only athletic activity in the University of Buffalo, for in 1896 and 1897, due to the untiring efforts of Dr. Irving R. Johnson, we find a hockey team organized and schedule arranged and games played with the leading Canadian teams and it met with more than average success. Dr. Johnson was the first hockey captain and Dr. J. B. Croff’s was the manager. Other members were: Hall, Peck, Cursons, Camper, Young, Harvell, Parker, Diller, Couper and Phillips. This sport continued for a few years and then was abandoned for lack of interest and again revived in 1920 and 1921, and for the past three years has been considered a minor sport by the Athletic Association. 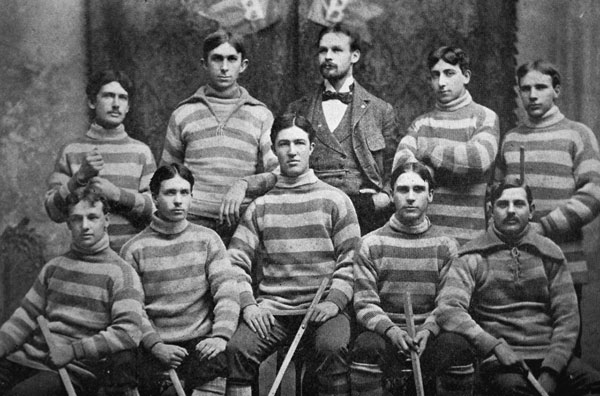 Again, in 1899, we find a new sport materializing in a track team, which did itself proud by winning a mile relay race at an indoor meet at the 74th Armory on March 3rd, 1900. The members of this team were: Peter McPherson, Wm. W. Carlton, G. McK. Hall, L. W. H. Gibbs, L. R. Bums, Cotton and Archeson. In 1915 and 1916 a relay team was again organized consisting of: Shaw, AI Dumke, Neil Carrick and Johnson. They held a relay race with Rochester at the 65th Armory and lost. In 1918 our relay team had a race with Syracuse and one with Hobart, we lost. In 1919 Ed. Mimmick was captain. They ran 4 or 5 meets and also entered the University of Pennsylvania Relay Carnival winning third place. In 1920 Ed. Mimmick was again Captain and a race was held with Niagara and University of Toronto. We won from Toronto and l9st with Niagara. This team also entered the University of Pennsylvania Relay Carnival and again won third place.

In the season of 1906 and 1907, we find records of a very successful basketball team. Basketball had been attempted somewhat in previous years but it war during the above years that a team in basketball attracted some little attention. The schedule was Comell-19, U. of B.-22 ; Niagara-9, U. of B.-36. These two games were played at home.

The out of town games were:

The Captain of this team was, J. Edward Cooney and William Hoofman, DeWitt Bell were the other members.

From 1907 to 1915-16 basketball around the University of Buffalo was slumbering peacefully. Since 1915-1916, our reputation in basketball has been maintained by our efficient Coach, Art Powell who as the coach is all that is to be desired in every way.

Baseball, is the one sport that seems to have been neglected in the University, for we find Varsity Baseball Teams only in the year 1915 and 1916. They however, were very successful even though the sport only survived two years. Steinmaker was captain in 1915 and Burns captain in 1916. As has been said baseball has received the least attention of any sport that has been started. There are several good reasons for this, first, the climate is very tardy here for an attempt as early spring practice and then to, final examinations begin earlier by two or three weeks than at other Universities, so that baseball would indoubtly interfere with studies too much.

In the spring of 1923 there were several games of baseball arranged between the various departments and this idea at least can be fostered and given more support in the future.

Previous to this time the Athletic Association had been known as the Football Athletic Association. Students became members by paying a one dollar fee. As the gate receipts were not large, the finances were enhanced by holding theatre parties in the old Star Theatre. The house was bought out cheap and tickets resold. The performances were known as the Hoyt plays. These theatre parties were appreciated by the management for one year, as history goes, Mrs. Hoyt presented a silver loving cup to the Association as a token of appreciation.

Since that time the Athletic Association has been functioning continuously, there being changes made in the Constitution and By-laws from time to time. On March 28th, 1917, the athletic fee was raised to $10.00 and the executive committee urged the Deans of the various departments to make the fee obligatory. It was not done. This request was again urged on January 28th, 1919, by the executive committee and it was done shortly afterwards. In the fall of 1919, and early in 1920 the Athletic Association revised this Constitution and By-laws and changed the title of the governing body from the executive committee to the Athletic Council and this new body was to include four Alumni members who were to be selected by the Federated Alumni Association. Dr. Harold Johnson. Dr. George Voss, Charles Kennedy and Dr. Nelson W. Strohm, were the Alumni members elected at the annual banquet February 22, 1920.

In the fall of 1920, we began to use Rotary field, as our football gridiron, which was in terrible condition. The only preparation it received was a steamroller run over the large mounds of dirt. Since then a wonderful gridiron has been constructed, also, a club house and a basketball court, with living quarters above it, have been provided. Last year a section of permanent grand stand was erected which seats about 300 people.

During the past year, football, basketball, swimming and hockey teams have been organized and supported and at this time it looks very favorable for a track team.

Last year our football candidates were given pre-season training by Coach Bond and trainer Jimmie Griffin on the lake shore at the Y. M. C. A. camp for two weeks previous to the opening of the University. This was never tried but, once before and that in the fall of 1921. when the candidates were gotten together about two days before the college opening date and they were housed at the Men’s Hotel and practiced at the “‘Front” both attempts seemed to prove that the finish was a very good one.

Some of the men who were most prominent in athletics at the University of Buffalo from 1894 to 1902 are: Dr. Irving R. Johnson, Dr. James B. Crofts, Dr. U. B. Stein, Dr. Couper, Dr. B. T. Simpson, Dr. Robert DeCeu, Dr. Wm. Bott. From 1915 to the present, the men who have carried on are: Dr. George Woodbury. Walter Ralph. Dr. Chester Cott. Professor William Y. Irons, Willis G. Hickman. Dr. Nelson W. Strohm and last but not least, Coach Arthur Powell. Powell was a real pioneer in athletics during the year of 1915 and up to the present. Many times his coaching duties were the least of his work in athletics at the University of Buffalo. It is hardly necessary to say anything about his coaching ability as students and Alumni knew it to be of the highest order. He always insists on gentlemanly athletes, who play a hard clean game. He is a credit to our University and to any sport.

We are very grateful to Dr. Irving R. Johnson, Dr. U. B. Stein. Dr. James B. Croff and Hon. T. C. Moore of N. Y. C. for the information in this history and especially grateful to Dr. Nelson W. Strohm who devoted much time in collecting these pictures and data.