The article below first appeared in the September 24, 1970 issue (Volume 2, Number 3) of the UB Reporter. 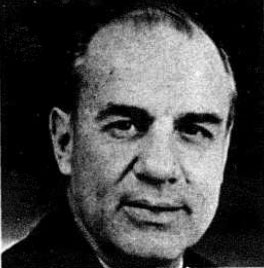 “Buffalo is a bush league place to play college football,” the Roanoke (Va.) Times snapped last fall after the big time Gobblers from Virginia Tech played U/B’s “Golden Bulls” in War Memorial Stadium. “Less than 2,500 saw the game and that includes second and third string football players, 25 policemen and 13 pigeons who came only to look for peanuts.”

It stings local pride, but the barb from Virginia is near the mark. Less than 10,000 turned out for the Ball State game two weeks ago and the attendance for Toledo was 7,500. Both figures are very minor by standards applied to “major” college football, the circle in which U/B is supposed to travel.

You’d expect Dr. Harry Fritz, new director of the Division of Physical Education, Recreation and Athletics, or U/B Sports Boss as he has been dubbed by the local press, to be concerned.

And he is. But he’s not full of panaceas. In fact, he’s mystified by the lack of student and community interest at the gate.

The classic way to build support for an intercollegiate athletics program, Fritz says, is to have a good program. And he thinks U/B football, in particular, has been good. (Or at least he thought so before this season got underway.)

So now what? You try to build attendance. And there are some ways that haven’t been tried here yet.

For example, Fritz suggests that reserved student seating— in blocs or on an individual basis—might help. This would encourage fraternities and residence halls to attend en masse, he feels.

Some schools also go into “package weekends” with the pros in order to build community interest, he volunteers, not indicating whether or not that might be done here.

Then, too, you might play a more “attractive” home schedule (provided you had a suitable place to play it in—and War Memorial Stadium, in his view, is clearly not such a place). Many major schools have responded favorably to the idea of playing in Buffalo if there is a domed stadium, but, of course, there isn’t. Despite that, Fritz feels that the move can and will be made to include on the U/B schedule institutions “like us.” Who might those be? Rutgers and Pitt, to mention a few.

The cynic might ask, “Why bother? If so few people are interested in U/B football, why have it? Maybe it’s irrelevant.”

Fritz blanches at this one. It hits him where he lives.

Not that he doesn’t think it should be discussed. “Just because we’ve had college football for 100 years,” is no reason to bar an examination of why we should continue to have it, he says. “Any program in a university should attempt to present its objectives and explain its place in the frame of things.”

Fritz considers it “given” that athletics are educationally sound.

Sports help develop mental health, morale and maturity, he contends. They build values such as “discipline, sacrifice and loyalty.” He notes with pride that athletes who used to 2 dismissed as prankster panty -raiders are now considered very “establishment,” a word he doesn’t use as an epithet.

The values of intercollegiate sports, he feels, go beyond those offered to the relatively few individuals who participate. “I’ve watched what happened to the University of Chicago and the many Jesuit schools that have dropped football, ” he says. They’ve lost something that provides “a good force” on campus and a focus for alumni—a way to develop school pride and bring people together.

The Gym Should Be A Center

On the intramural side of things, Fritz says, a well-managed properly-equipped campus athletic center can become a hub of student activity similar to a student union. A gym or central recreational facility ought to be open around the clock, he feels, offering a variety of alternate options for “letting off steam.”

He’s determined to fix-up the present gym facility (inadequate as he agrees it is) and to use imagination to expand recreational opportunities and further develop club and intramural sports for the benefit of the mass of the student body. He envisages the appointment of a full-time career specialist who will work with club sports and other activities. This is a “critical” need of the University, he says—a need which he feels simply can’t be ignored “until Amherst.”

Since student fees underwrite the recreational program (the mandatory fee goes for both intercollegiate and intramural programs), Fritz speaks of an “accountability” to students. Too many athletic directors, he says, make the mistake of taking a “high-handed” approach. He wants to maintain a “full dialogue” with students, to “merchandise” the program for them. Among several reasons for this might be that a student happy with the recreational aspects of the program will probably be a lot more responsive to, and enthusiastic about intercollegiate sports.

Fritz also has hopes of eventually offering an academic major for the professional preparation of recreational and park administrators—”leisure scientists,” he calls them.

At present, however, the University’s professional programs in health, physical education and recreation are not aligned with the Division of Physical Education. Coaches and other professionals are trained through the Faculty of Educational Studies which shares but one faculty member with Fritz’s division. The Division’s only “academic” programs are the physical education “service” courses for students in Undergraduate Studies.

Although he was formerly dean of a “school” at Western Illinois which combined the professional preparation with intercollegiate, intramural and “service” functions and although many universities organize it that way, Fritz isn’t about to suggest that it “ought” to be that way here. There are valid, historical reasons for keeping intercollegiate athletics divorced from professional preparation, just as there are other reasons (combining of personnel, pooling of facilities, etc.) that argue for combination. It’s a decision that rests elsewhere in the University.

Returning to the intercollegiate aspects of his Division’s program (for which he hopes to name a director before the year is out), Fritz looks for a buildup of alumni and community monetary support for certain things (grants-in-aid and other incidental expenses) not funded by State or student monies—funds which are necessary to keep the program’s budget balanced. The $100,000-plus payment for televising the home Holy Cross football game this year will help in that regard, of course, but that can’t be counted on every year (although TV might become more frequent if the caliber of the team and of the schedule pick up). The Alumni Association’s new Golden Bull Fund (with a full-time director) is a step toward developing this necessary outside support. There’s an interested, active group of potential alumni donors who really “love” the University, Fritz points out. But – well, any such funding efforts right now are “hampered by campus events.” “People just don’t understand,” he says.

Even schools with phenomenally successful football programs (whose incomes used to carry a number of other campus activities) are feeling a financial pinch, Fritz says.