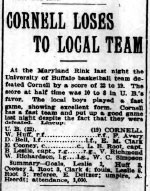 Building on the momentum started the previous season, the University of Buffalo Athletic Association and the U.B. students embraced the 1906-1907 Buffalo Basketball team. Over 30 candidates tried out for the squad including all the men from the previous year’s crack team. Cornell had again agreed to travel to Buffalo to meet U.B. at the start of the season. And manager J. Edward Cooney had an extended mid-season road trip booked for February. Games against Syracuse, Yale and Princeton were also pending. (see “Basketball” Buffalo Courier, 19 November 1906)

The season started out in grand style as the University of Buffalo upset Cornell University 22-19 for U.B.’s first ever collegiate basketball victory. The game was held at the newly opened Palace Roller Rink on Maryland Street in Buffalo, N.Y. Seemingly, the local Buffalo newspapers weren’t sure how to react to the score. A good example is the article from the December 1, 1906 Buffalo Courier. The event was addressed as a Cornell loss as opposed to a Buffalo victory. The University of Buffalo clearly had a ways to go before it won the hearts and minds of the Buffalo general public. 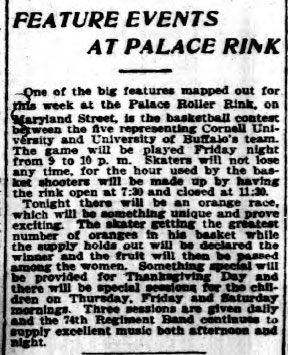 It’s interesting to note that “open skating” was advertised and made available before and after the basketball games. Patrons were reassured that no skating time would be lost due to the basketball game. Holding a college basketball game at a roller rink certainly seems odd today but a roller skating craze swept the nation in the early 1900’s. By 1905, roller skating rinks opened in cities throughout the East Coast, and skating was often chosen over dancing and other types of entertainment.

After the holiday season break, the University of Buffalo team was back in form and won 4 consecutive games starting with a 36-9 thrashing of Niagara University. The February road trip brought Buffalo it’s first two loses of the season but by the end of the trip to team had a respectable 6 -2 record.

As reported in the 1907 Iris yearbook, despite its good record, for some unexplainable reason the team as a whole forfeited in part its right to claim the admiration and loyalty of the student body, by committing an act which cannot be excused. After the manager had fitted out the team, made up a good schedule, taken the team on a week’s trip, and treated them like men, they participated in a most deplorable fiasco. A game was arranged with the team of Niagara University on February 22, 1907. All knew of the game, and had practiced for it. A large crowd paid admission to see the game. The result — the manager Cooney and one man, Richardson, put in an appearance. (see “Buffalo Team Did Not Show Up For Game” Niagara Falls Gazette, 23 February 1907)

As a result of the enthusiasm of the University of Buffalo Athletic Association, a great boom for athletics has been started by the students and faculty of the local institution. This being the season for basketball over 30 candidates responded to the call for practice, which was given three weeks ago. Among the men were all of last year’s crack team, which was the first in the history of the University, and a number of players who have represented various college, Y.M.C.A and high school teams in different parts of the country.

The players have been practicing faithfully for the past three weeks in an East Side gymnasium under a competent ex-college coach and from the form and speed displayed by all, it will be no easy matter for the coached to pick the representative team. Last years men will have to do some playing to hold their positions, as the new candidates are pressing them hard for their places.

J. E. Cooney, formerly of the Bradford Y.M.C.A., and a forward on last year’s team, has been elected manager, and is out for his old place at forward the season. Lozott, the big center, who captained the Cook Academy for three seasons, is back in form, and, has been elected captain of this year’s U.B. team. Billy Richardson, the clever guard of the Central Y.M.C.A., and Billy Hoffman, the giant guard of the St. Stephen’s quintet, are attending college this year and are playing in better form than last year.

The school is considered more than fortunate in having among its students this year Burton Leslie, the local all around athlete, and captain of last year’s basketball and football teams at Central High School. Leslie needs no introduction and is considered one of the cleverest basketball guards in the country. Bell of last year’s Masten Park team, Vincent of St. Lawrence Prep school, McDougal, last year’s speedy forward, Walker of Chicago University, Ross of Ann Arbor and several other notable players, are attending school and have been out for practice.

Little Jimmy Strebel last year’s captain, has not been out for practice yet owing to a sprained ankle. Manager Cooney has been working hard to secure a good schedule and has games arranged with some of the leading college teams. The opening game will be Cornell on November 30. The new Palace roller rink on Maryland Street, near West Avenue, has been secured for this big game, and it is an ideal place for a big college game. Arrangements are already being made by the alumni of Cornell living in Buffalo to attend the game in a body, and cheer for the wearers of the Red and White. It is expected also that members of the alumni of the institution will be present in large numbers to cheer for their alma mater. The management has arranged for a band concert during the evening and from present indications it will be the first real college game flavored with the true college atmosphere ever seen in Buffalo. A large number of enthusiastic rooters will accompany the team from Ithaca and they promise to make the air ring with college songs and yells. Cornell has lost a few of last year’s team by graduation, but their place has been taken by men who from all reports have shown greater playing ability. The game last year was a close one, Cornell only winning by a small margin of four points. It was the locals first game of the season and they had only been practicing about a week while Cornell had played several big college games and was in first-class form. However, this year “Old U. B.” will have no excuse to offer, for they have been training faithfully and fully expect to win.

Everything will be done to entertain the Cornellians and there will be skating before and after the game. Following is the U.B. schedule up to date:

Besides this games are being arranged with Alfred, Hobart, Syracuse colleges, also Yale and Princeton, who are coming trough Buffalo on a trip.

BUFFALO TEAM DID NOT SHOW UP FOR GAME

There was no basketball game between Niagara University and the University of Buffalo last night owing to the failure of the Buffalo players to put in an appearance. Up to 8:15 o’clock the manager of the Niagara team confidently expected the U. of B. quintet. At that time the Buffalo manager communicated by telephone, saying that he could not get his team together.

Such action is hardly consistent with the best ideals of sport. The Niagara manager had been put to considerable expense in advertising the game, and a good number of basketball fans were on hand to enjoy the sport. The Niagara players were on edge for the game, and there is no doubt that they would have been able to give the Buffalo five, strong as it is, a hard run for honors. It has been suggested that the action of the University of Buffalo team was inspired more by fear of defeat than anything else. In any event, it is unlikely that it will again be given a date in Niagara Falls.