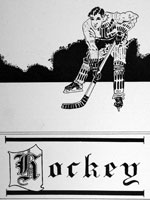 Hockey, under the influence of our Canadian neighbors, enjoyed pockets of support by the University at Buffalo through the years. According to Volume I of the Iris Yearbook, the first U.B. hockey team was organized in the winter of 1895-1896. The sport continued for a few years and then was abandoned for lack of interest. It was revived briefly in the 1920’s and faded again. In 1962, a team was formed that played at the club level and in 1969-70 it became an official varsity sport. In the late spring of 1987, the University decided to discontinue it as a varsity sport and it is now played at the club level.