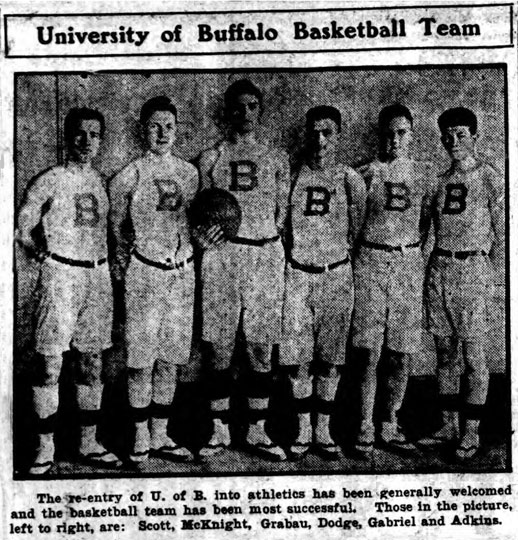 One hundred years ago, the University of Buffalo’s slow return to intercollegiate athletics continued. During the previous two years, each of the departments of the university had representative basketball teams which competed for a championship cup offered by the Buffalo Central Y.M.C.A. From this pool of talent, Dr. Edward G. Froeber, who was engaged as coach, picked a varsity five with a number of substitutes for a 1913-1914 University of Buffalo basketball team. Dr. Froeber was a 1910 graduate of the U.B. Dental School and also starred in athletics at Masten Park High School in Buffalo, NY.

Buffalo had success against smaller schools, defeating the Mechanics Institute of Rochester twice, but was outclassed by more experienced teams. A 65-12 rout by Cornell in Ithaca against Cornell’s reserves was telling as was two defeats to Canisius College. Although the 1913-1914 Buffalo Basketball team had minimal success, none the less, progress was being made.

Finding detailed information about the 1913-1914 season is challenging but using local newspaper records, a fairly clear picture of the season comes together.

U. OF B. HAS A GOOD BASKETBALL SCHEDULE

Chicago University Five May Stop Off Here for a Game.
—

It begins to look as if Buffalo is going to see a bit of intercollegiate basketball before the season is history if the present plans of the U. B. students do not fall through. Manager Dodge of the Varsity team has been having some trouble booking games, but the results are now coming and the schedule will soon be completed. The contests, as they now stand are as follows:

According to reports from Chicago, the Maroon varsity combination leaves on an eastern trip the latter part of this month and will make Buffalo a jumping off place between the games at Cleveland with Western Reserve and at Ithaca with Cornell. This means that U. B. will be taken on and it is up to the local followers of basketball to turn out at this game so as to give the U. B. students the necessary financial backing to allow them to bring other well known college teams here for games.

So far this season the local college aggregation have played three games. Mechanics Institute of Rochester suffered two defeats, while Manager Dodge’s squad were badly walloped by Brockport Normal. This is no disgrace, however, as those down State Normalites have a wonderful team this year.

The game with Canisius, scheduled for December 18, was put over until later in the season, when the two teams will face each other in a contest to decide the college championship of our city.

The U. B. varsity combination has been picked from the various teams in the inter class series and during the rest of the season will line up as follows: Forwards, Gabriel, Dodge and Atkins; center, Captain Grabau; guards, Scott and Harrington.