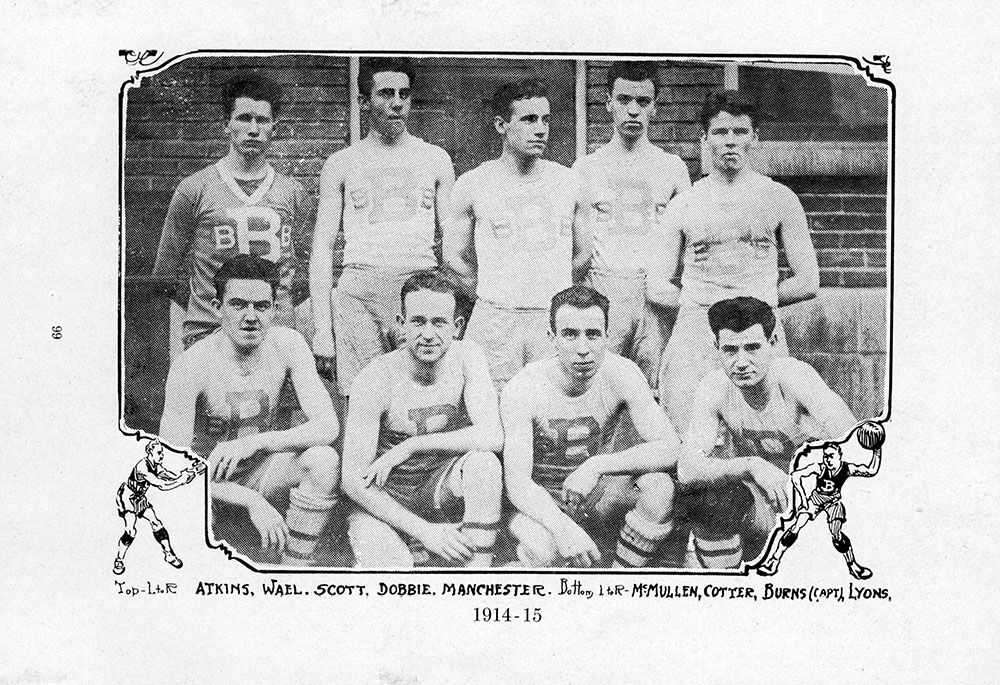 Trying to build on the momentum of the previous season, the University of Buffalo basketball team struggled against all challengers in 1914-1915.

An opening season lose to Canisius College was followed by defeats to Niagara University and Cornell among others.

In mid-January, the team reorganized in the hope that it would be able to give Canisius a better game in their rematch. (see “U.B. Reconstructs Basketball Team” Buffalo Courier, 12 January 1915)  The tactic did not work as Buffalo was again overwhelmed 40-16 by the college boys from Canisius College.

Although the interest was there, the University of Buffalo basketball team was clearly second rate.

In the opening game of the basketball season Canisius defeated
her old rival, the University of Buffalo, 25 to 8.  The game was fast
and closely contested but U.B. was unable to break down the team
work of her opponents.

The adoption of the intercollegiate rules by the two colleges made the
game fast Saturday and at times somewhat rough.  The first half of
play was a hard fought one and at the call of time the score stood
9 and 6 with Canisius on top.  In the second half the wearers of the blue
and gold forged ahead allowing but one field goal to their opponents.
The university squad had luck against them in their shooting.

Captain Nash of Canisius playe a great game, covering every inch of the
court and dropping some fine shots. Ed Lyons was conspicuous for his
timely shots and lightning dribbling. Manchester starred for the law school
rolling in several field goals.

The hall on Washington street was crowded.  The style of play under the new
rules makes the game more interesting to watch. 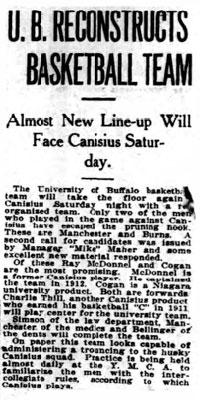 The University of Buffalo basketball team will take the floor against
Canisius Saturday night with a reorganized team. Only two of the men
who played in the game against Canisius have escaped the pruning hook.
These are Manchester and Burns. A second call for candidates was issued
by Manager “Mike” Maher and some excellent new material responded

Of these Ray McDonnel and Cogan are the most promising. McDonnel is
a former Canisius player. He captained the team in 1912. Cogan is a
Niagara university product. Both are forwards. Charlie Thill, another
Canisius product who earned his basketball “C” in 1911, will play center
for the university team

Simson of the law department, Manchester of the medics and Bellinger of
the dents will complete the team.

On paper this team looks capable of administering a trouncing to the husky
Canisius squad. Practice is being held almost daily at the Y.M.C.A. to
familiarize the men with theintercollegiate rules according to which Canisius plays.