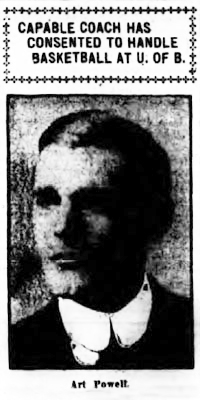 With Buffalo fielding a football team for the first time in over ten years in the Fall of 1915, the school administration decided that basketball should also officially return as a varsity sport.

Not having a gymnasium anywhere on campus, the team was forced to practice in the gymnasium of the Buffalo Turn Verein, a social/cultural club located at 385-387 Ellicott St., Buffalo. Most home games were played at Orioles Hall, 566 Genesee St, Buffalo, NY. The hall was built in 1914 for the Fraternal Order of Orioles, a social and charitable organization, by prominent Buffalo business leaders of German descent. The building still stands today.

The 1915-1916 season started slowly as U.B. lost four straight games. In mid-February of 1916, Coach Art Powell’s training finally took hold and Buffalo went on a roll winning their last seven games. The University of Buffalo capped the season with a best of three series against Canisius College.  The series was called the “city collegiate basketball championship” and was played at the Elmwood Music Hall. Buffalo won the first game beating Canisius College narrowly by two points 27-25.  U.B. wrapped up the city championship the next game with a convincing 40-23 victory. Buffalo’s first official basketball season was a success. (see “U.B. Basketball Five Makes Good Record for Year” Buffalo Evening News, 8 April 1916)

U.B. Basketball Team Should Be Topnotcher

—
Manager Tommy Atkins of the University of Buffalo basketball team announced yesterday the appointment of Art Powell, the diminutive former star of Syracuse, as coach of the local seminary’s quintet of basket shooters. Incidentally the schedule for the season was made public and the names of several men, who are fighting; for positions on the local aggregation.

Taking everything, including Art Powell, the candidates for positions on the five and the schedule arranged for the season, into consideration it looks as though the University of Buffalo will get recognition before the year has progressed very far. Powell up to last year was coach of the University of Rochester basketball team. The Dead City teams beat the best of them under his tutelage.

There is daily practice in the Turn Verein hall, which is not far from the university in High street. If the material, which has turned out during the past few days, is any criterion, the local quintet will be an all-star aggregation. Among the candidates are three members of last year’s victorious Canisius team, which nearly completed the season without a defeat. They are Lyons, McMullen and Cotter.

—
Winning seven out of 11 games is the record of the University of Buffalo basketball team for the 1915-16 season. The local collegians hold victories over Hobart, Carnegie Tech, St Bonaventure, Clarkson Tech and Canisius College, having defeated Hobart and Canisius on two occasions. Their losses were the Carnegie Tech, Duquesne, Niagara Falls and St. Lawrence.

The local intercollegiate basketball champions brought their season to a most successful close with the victories over Canisius. The team was off to a very weak start, losing its first four games but after a few weeks of practice under the teachings of Art Powell showed the class of the big college teams.

Manager Atkins, Siegel, Lyons, Burns, Manchester and Scott will receive sweaters at the smoker to be held April 20. Arthur C. Flentge was elected manager for the next season with Tex Anderson assistant manager