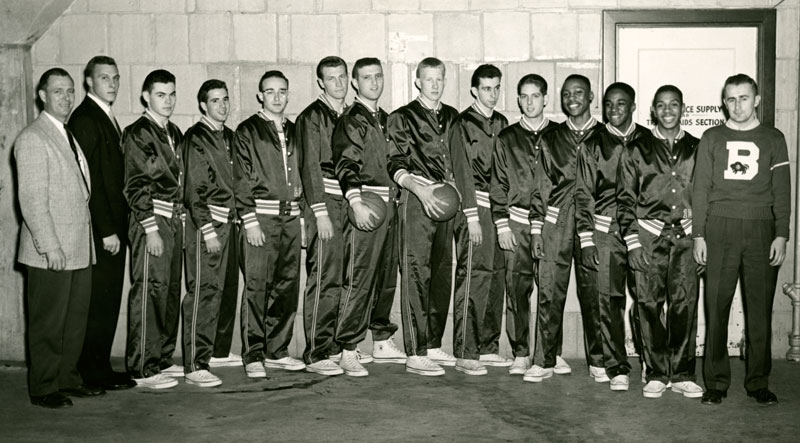 The 1955-1956 Buffalo Bulls basketball season was Mal Eiken’s 10th year and last season as head coach of the basketball Bulls. On February 7, 1956, he announced that it would be his last year in Buffalo. After 10 seasons, he was heading back to his native Minnesota to enter into private business.

Although graduation took a heavy toll on the 1955-1956 team, the undersized Bulls surprised many. One of the highlights in the successful season was a 70-66 upset win over a towering Akron squad. (see “UB Defeats Akron, 70-66, for 12th Victory of Cage Season” Buffalo Courier-Express, 18 February 1956)

It was hoped that the win over Akron would propel the Bulls into the National Association of Intercollegiate Athletics (NAIA) tournament. The NAIA basketball tournament featured 32 small-school teams playing in a single-elimination format. Unfortunately, the NAIA invite never came.

Annable And Levitt Star For Buffalo

The University of Buffalo basketball team won one for its coach, the retiring Mal Eiken, as it nipped towering Akron, 70-66, in a tingler last night in Clark Gymnasium.

Bill Annable, senior center from Middleport, played the game of his career to help make the Bulls’ record 12-3. He made 18 points and swept the boards against opponents three and four inches taller. Next highest scorer for UB was Kurt Lang, with 17 before going out on fouls with five minutes to play.

A most significant contribution was that of Dave Levitt who came off the bench for a 12-point night. During the final 1:50 Levitt dribbled magically and went six for six from the free throw line. Akron, coming in with a 17-2 mark, was led by Dick Ondecker, a clever forward, with 16, and sharpshooting Joe Wood, with 15.

UB trailed 6-0 against Akron’s zone and was down 11-3 when Art Cholewinski tapped a rebound. Annable followed suit, Lang hit two free throws and Chuck Daniels found the mark with a jump. The Bulls went on to a 38-34 advantage at halftime.

Akron, which closed the gap to one point in the second period, called time when trailing 57-47. and closed in again on Wood’s leap and Larry Ondecker’s two free throws. The Zippers had abandoned the zone by this time.

The Bulls slashed the man-for-man setup with drives off the post by Daniels, two by Lang and another by Roy Fowler, with only Wood’s side push shot as an answer.

Akron rallied a bit later on a push by Johnny Economou and a jump by Wood, but the Bulls protected the ball well to hold their margin the rest of the way.

The victory enhanced UB’s chances of competing in the NAIA regionals next month. An invitation would be a fitting climax to Eiken’s career. He will leave UB in June.