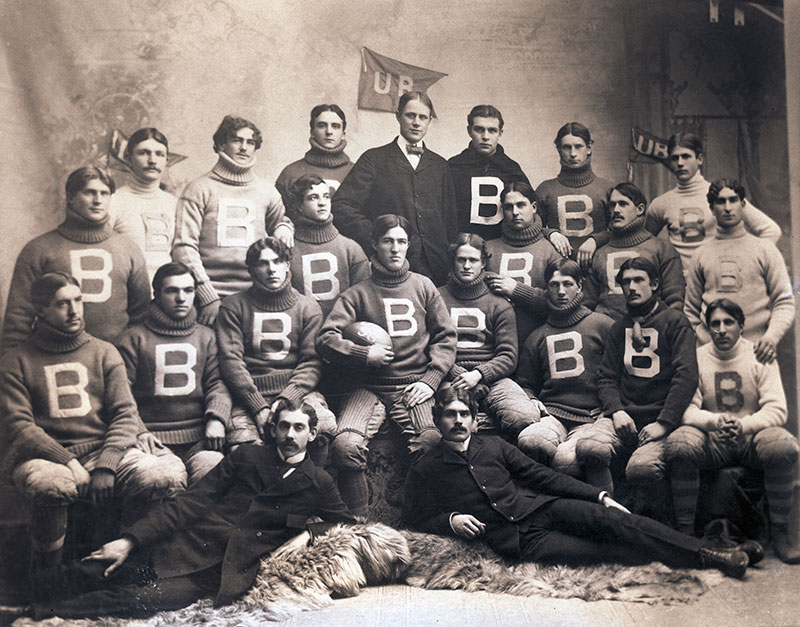 According to official University at Buffalo records, the 1896 Buffalo football team finished with a record of 1-0-2.  But the team actually had a much better season compiling an overall record of 9 wins, 1 loss, 2 ties and made a valid claim of being the champions of Western New York football. The team was coached by Fred D. Townsend. He was a former player at Andover Prep and Williams College and had been captain of both. 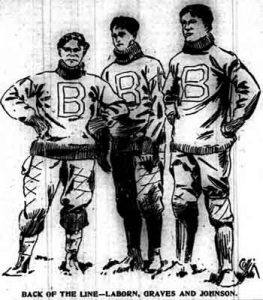 With this being the early days of Buffalo football, securing a match against a “major” university football team was a bit of a challenge. So the real rivalries of the day were against local Western New York college teams and established “club” teams. The main “club” rivals of U.B. were the “25th Separate Company A.A.” from North Tonawanda, NY and the “Lancaster F.C.” from Lancaster, NY.

The “25th Separate Company A.A.” was composed of military men and was commonly referred to as “soldier boys” in newspaper articles. The Lancaster team was mostly ex-college players and other “semi-pro” athletes.  Local newspapers were very loyal to their teams. The sports editors from the North Tonawanda Evening News were particularly partisan and took every opportunity to disparage any “25th” rival especially the varsity “boys” from Buffalo.

Buffalo started out its season with a convincing 30-0 win over the 25th Separate Company A.A. They followed that up with quite possibly their first victory over a collegiate foe, a 62-6 win over the University of Rochester. (see “A Gleeful Day for the Bisons” Rochester Democrat & Chronicle, 11 October 1896) But a late season rematch loss to Lancaster left both Buffalo and the 25th Separate Company A.A each with only 1 lose for the year and seemingly tied for the first place in the championship race of Western New York.  A U.B./25th rematch was never played and the WNY football season ended seemingly unresolved.  The situation was so upsetting to the press, an editor from the North Tonawanda Evening News wrote a great article advocating for the creation of a Western New York Football League. (see “Reviewed” The Evening News, 14 December 1896)

A GLEEFUL DAY FOR THE BISONS

It was a decided surprise to the Rochester men, some of whom had expected to defeat the Bisonic students, but that was a different belief than was shared by many who had been the Flower City students at practice. Here, with but a couple of exceptions, the players are perfectly green. There they are men of considerable experience.

There are too many candidates here, and they hare been in practice too short a time to hate perfected their team work to the extend of keeping it intact against the brunt of another team of equal strength, and at the present stage Buffalo is considerably stronger than Rochester, and being experienced, knows how to break up plays which are problems unsolvable to the local players.

The score was larger than the most pessimistic observer of the local team’s practice anticipated, it being generally believed that the final count would be about 80 to 0. The sole touch-down made by Rochester was on a trick criss-cross play which worked the first time and failed after that. Jessup scored the touch-down.

There was one occasion when Rochester pulled itself together and worked the ball down to within three feet of the Buffalo goal line and then lost it on downs by using line-bucking tactics where it is probable that end plays would have carried it over for a touchdown. That was the only occasion when the representatives of this city came anywhere near scoring by steady advances upon consistent team plays. Except upon the occasions when Buffalo kicked off Rochester did not have the ball over a half dozen times and then quickly lost it upon downs.

It is not that Buffalo has a very strong team or is particularly good in team play, unless the game the local students put up yesterday lie used as a standard of comparison. Viewed in that light, Buffalo played splendid foot-ball, but looked upon from the standpoint of a really fairly good eleven the Bisons played very poorly.

The Buffalo backs have that horrible fault of running back with the ball and had the Rochester ends, tackles and halfbacks known their business the tale would have been an entirely different one this morning. This fault the University of Rochester did not display and, in part, the interference of the local men around the ends was as good as that of the blue and white, considering that the work of the latter’s ends, tackles and backs upon the defensive, was much stronger than that of the corresponding players wearing the lemon-colored letter R. Owing to Rochester’s weak ends Buffalo players went around the extremities of the line for touchdowns after runs of half the length of the field and over.

The Western New York season generally was fairly good, but not nearly so satisfactory as it would have been had there been a regular series of games, for if a schedule had been arranged and adhered to the question of the championship of this end of the State would have been settled, instead of being left in doubt as it has been. I am not a kicker to any great extent. I prefer kicking of this kind:

But I am certain that so long as there is no Western New York League, just so long will there be no satisfactory football seasons in the western end of the Empire State. It had been suggested before, and the suggestion is now repeated, that a league, composed of the 25th Separate Co. eleven, U. of B., Lancaster and St. Bonaventure, be organized,a schedule prepared, regulations adopted, and a regular series of games played each season to decide the Western New York championship. Then we should have good football, and lots of it. And at the end of the first season, I believe, the soldier kickers of our own city would be found lying right across the goal-line of success.