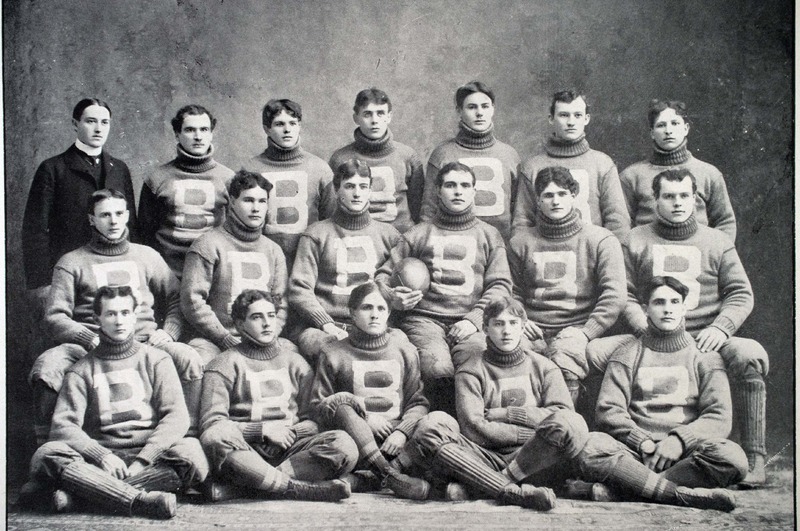 Prior to the 1899 Buffalo football season, Buffalo made an effort in obtaining the coaching services of Frank Hinkey of Tonawanda, NY, the former star player from Yale. But the two sides could not agree upon financial terms so Buffalo played its first game of the year without a coach. And it turned out to be a bizarre game at that.

The season opened for Buffalo at home on October 14, 1899 against the University of Rochester. The game was scoreless going into the second half when the referee, William H. Baer of Oberlin, ruled against Rochester over the interpretation of one of the rules of the game. In the prolonged dispute which followed, the Rochester team withdrew from the playing field refusing to return, disappointing a crowd of nearly a thousand football enthusiasts. After much confusion, the match was ruled a forfeit. Final score: Buffalo 6, Rochester 0. (see “Rochester Left the Buffalo Field” Rochester Democrat & Chronicle, 15 October 1899)

One important move the University finally made after the game was to hire a new coach. On Monday, October 16, 1899, the University of Buffalo announced the hiring of Bemus Pierce. Bemus Pierce, a member of the Seneca Nation, was born on the nearby Cattaraugus Reservation. Pierce was a famous football star having attended the Carlisle Indian School where he played on the great Carlisle football teams from 1894-1897, serving as captain for three years.  This was seemingly his first professional football coaching position.

The news of a Native American coach had the newspapers abuzz. According to the Buffalo Enquirer, “Buffalo realized that they can do little without a competent coach. The members of the football team of the University of Buffalo, helped out financially by the rest of the students in the university, have secured the services of Bemus Pierce. Pierce is the famous Indian player who made such a record while with the Carlisle Indian school.” The Buffalo Express applauded the hire and thought that the move was “bound to help make a reputation for the U. of B.” The Syracuse Evening Telegram, thought the hire was “quite an innovation … a Red man instructing white youths in the art of football.” Not surprisingly, the use of racist terms and language is seen in many of the newspaper articles encountered about Bemus Pierce’s time in Buffalo.

In the hands of Coach Pierce, the Buffalo team was transformed. The next game was against Case Institute and Coach Pierce was happy with the limited amount of practice he put the team through stating: “They are all right, they are playing the game as it should be played and Case will not beat them, for they are holding them too well.” His confidence was well earned as Buffalo beat Case 18-0.

The following week, the team traveled down to Pittsburgh, PA to play the mighty Duquesne Country & Athletic Club.  The D. C. & A. C. was a professional football team based in Pittsburgh from 1895 until 1900. The team was considered one of the best, if not the best, professional football teams in the country from 1898 until 1900 and was filled with former college stars.  Bemus Pierce had played against the D. C. & A. C. as a member of the Carlisle football team so a large portion of the crowd came just to see him.  The Buffalo team was sadly outclassed.  The Buffalo Express described the day as follows: “The Duquesne Country and Athletic Club giants would not let up on the visitors, but played just as hard as if they were meeting a team which was holding them down to the limit. The Buffalo lads were a game lot. They took their medicine without a whimper and earned the plaudits of the crowd for their grittiness.” In the end, the D. C. & A. C. beat Buffalo by the overwhelming score of 52-5.

The contest in Pittsburgh most have been a good learning experience. Buffalo went on the win the rest of its games including victories over Syracuse University, Hobart College, Western Reserve, and Bucknell University. Coach Pierce tried to secure a match with the Carlisle football team for Thanksgiving Day but the game never materialized. Buffalo finished the season a perfect 6-0 against collegiate foes and 7-1 overall. In fact, no collegiate team was able to score on them the entire year.

Bemus Pierce would return not to the University after the 1899 season.  In 1900 & 1901, he played professional football for the Homestead Library & Athletic Club in Homestead, PA, near Pittsburgh. He then played for the All-Syracuse team in 1902, the first indoor professional football team. Pierce would also coach football at the Carlisle Indian School and Sherman Institute and also coached baseball at the University of Wisconsin. Pierce has been inducted into the American Indian Athletic Hall of Fame at Haskell in Kansas.

An Adverse Decision Thought to Have Been Unfair

SCORE WAS THEN A TIE

BUFFALO, Oct. 14 – The football game which was played at Athletic field today between teams representing the University of Buffalo and the University of Rochester came to an unpleasant end in the second half, leaving the question of supremacy in doubt and disappointing an assemblage of about a thousand football enthusiasts. The question which dampened the game and finally wound it up was raised over the interpretation of one of the rules. Both sides were firm in their belief as to its correct meaning. Mr. Baer, who refereed the second half, was positive on the question, and as he had the ruling in his power he decided against Rochester. Mr. Barclay, the umpire, was as firm in his stand, and, owing to the difference of opinion, Captain Stewart took Manager Goasline’s advice and refused to abide by the referee’s decision, and finally left the field with his team. The game was awarded to Buffalo by the score of six to nothing.

The point in dispute is covered by part of rule sixteen of the playing rules and reads as follows: “The man who first receives the ball when it is snapped back shall not carry the ball forward beyond the line of scrimmage unless he has retained it after it has been passed to and has touched another player.” The U. of B. had worked the ball down to within one foot of Rochester’s goal, where the visitors secured the pigskin on a fumble. Rochester prepared to kick the ball. It was passed back beyond Rochester’s line to Stewart in poor shape and he was unable to kick, but started with the ball on a run and was tackled by Simpson just after clearing the goal posts. The ball flew from his grasp, but was picked up by Phelan and carried twenty yards before he wan finally downed by Gordon. Captain Thomas immediately protested the first part of the play, inasmuch as Stewart had carried the ball beyond the scrimmage line, without kicking or passing to a third player. The dispute lasted long and was loud, and both officials stuck to their ideas with the result that Buffalo was awarded the game.

The occurrence is to be regretted, especially as it was the first game of the season here. Captain Thomas remarked after the smoke of the battle had cleared away: ‘While I regret the affair very much, and was on the point of giving in once or twice on account of the public, I think we did right in sticking to our point, which the rules cover very explicitly and plainly. Mr. Baer did his duty well and was fair and impartial all the way through.”

The ball was kicked off at 3:50 o’clock. Buffalo won the toss-up and chose to defend the south goal, giving the ball to Rochester. Captain Stewart sent the ball to Buffalo’s 20-yard line, whence it was returned by Harrison to the center of the field, the latter doing some fine dodging and being helped on his way by good interference. Gordon, Hall and Cursons made small gains through the center, but Harrison lost in trying to get around DeMallie’s end, with the result that Gordon was forced to kick on the second down. Turk sent the ball 40 yards, and Cooper was downed in his tracks with the ball. It took a nasty bound and he was unable to get hold of it in order to sprint, and Hall was too quickly upon his frame to allow him much leeway.

Rochester then begun to make good headway and worked the ball back to the center of the field, mainly by center rushes, where it was lost by downs, and a fierce fight took place, the ball going back and forth from one team to another. Finally, the ball was passed back to P. Cooper, and he turned around Buffalo’s right end for a gain of twenty yard’s before he was brought to earth. Near next attempted to go through the center, but he lost control of the ball in the scrimmage and Unbehaun helped himself to it.

Turk Gordon and Leon Cursons began to bang at Rochester’s center, and for a few trials made good gains, but the other side began to hold well and secured the ball on downs. Rochester then became very aggressive, and at every play forced the ball closer to Buffalo’s goal, Weiuhauer, Phelan, Stewart and DeMallie being horses at thee bucking work. Rochester had but three yards to go to cross the line when the ball went to Buffalo on downs, and the local eleven began center formations that carried Rochester away from the good advantage they had earned, back to the center of the field, and when time was up for the first half the ball was upon Buffalo’s 85-yard line.

The players quickly repaired to their quarters and received attention, preparation and considerable advice from managers about the tactics to be employed in the second half. The play had been rough and fierce in the first half, both sides indulging in little scraps on the side. Rochester played the same men throughout the entire game, but Buffalo found it necessary to make a few changes, more for the benefit of the man than for the fact that it was necessary owing to knockouts.

Turk Gordon made the longest kick off seen upon the grounds in starting in on the second half, the ball going far back of the Rochester goal. Rochester was given the ball of the 25-yard line, from where Weinhauer chose to kick. Donavan stopped the force of the ball by a jump into the air and Simpson rolled upon it. McPherson had added life to Buffalo’s side from the moment he entered at the second half and gains began to be frequent for his side until the ball was within two feet of Rochester’s line. Rochester centered all of its forces at this point and Buffalo lost the ball on a fumble. This was the point at which the trouble occurred a moment later in snapping the ball back and in the manner in which it was brought to the front of Rochester’s goal line.

Considerable adverse comment was aroused over the action of Coach Barclay, who acted as one of the officials. The visitors were not only rutted against, but they lost the guarantee of $75 by leaving the field without finishing the game. The bad windup is to be regretted for two reasons: One is that it makes enemies of those teams which Buffalo would like to see friendship exist between and is a bad advertisement for the home games. Both sides have submitted statements for publication.