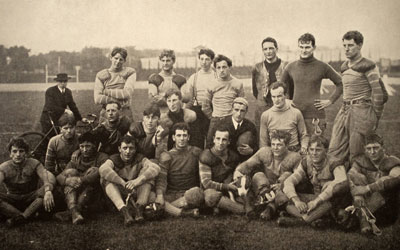 The 1903 Buffalo football season was a struggle. Even though the schedule was considered weak and some newspapers had Buffalo with “by far the best material that ever wore the blue and white,” the team went only 3-3 against collegiate foes and 4-4 overall for the year.

The season started out well enough. The first game of the year was at home on October 3rd and Buffalo easily beat Westminster College from New Wilmington, PA by the score of 14-0. The next game was withMasten Park High School (UB’s regular practice partner) and Buffalo won 10-0. A trip to Niagara Falls resulted in a 17-6 victory over Niagara University in what was called a brilliant football game. (see “Brilliant Football” Niagara Falls Gazette, 19 October 1903) Buffalo was looking good with three early-season wins and no defeats.

After a loss to Allegheny College in Meadville, PA, Buffalo’s next game was at home against Hobart College on Tuesday, November 3rd. It was Election Day, a holiday, and most people were off from school and work. The day was described as perfect for football. A crowd of over 3,000 spectators gathered at the Buffalo Athletic Field to see Hobart get “wiped off the map.” It was a rough game from start to finish. Although outweighed nearly ten pounds to a man, Hobart’s team work was superior to Buffalo’s. The end result was a 10-0 Hobart win and a disappointed Buffalo team.

Unfortunately, the mood went from disappointment to down-right despair. At the next game in Rochester, NY, Buffalo was destroyed by the University of Rochester 47-0. Early in the first half, UB Captain “Judie” Lawton was severely injury and unable to play. With an already depleted line-up, Buffalo was was unable to compete. The play throughout the game was nearly always in Buffalo territory and it was only by UB’s occasional defensive stands that they were able to keep the score as they did. Final Result – Rochester 47, Buffalo 0.

The team rebounded the next week sweeping the season series with Niagara as Buffalo beat them again 10-6, this time in Buffalo. Niagara lobbied UB hard for a third game to be played on Saturday, November 21st, but Buffalo declined.

The final game of the year was on Thanksgiving Day against the Oakdales, a semi-pro club team from Buffalo. The game was a rematch as the two teams played before a large crowd at Buffalo Athletic Field the previous Thanksgiving. The Oakdales beat Buffalo 10-0 in 1902 and clobbered them again in 1903 by the score of 33-0.

The season mercifully ended with Buffalo at 4 wins and 4 losses. But the news coming out of the campus later in 1903 continued to be ominous for athletics. Was the University contemplating dropping football from its list of athletic sports? (see “May Drop Football” Ithaca Daily News, 8 December 1903). 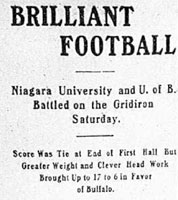 Niagara University and U. of B. Battled on the Gridiron Saturday

One of the best games of football seen in this vicinity for some time was that at Niagara University Saturday when the Varsity team lined up against the University of Buffalo. The game as well as being exciting was one of the cleverest played on the Varsity gridiron the Buffalo papers to the contrary notwithstanding. There was nothing doing particularly in the first half. From the first it was evident that neither team had developed any defense. Niagara kicked off and Buffalo advanced the ball by bucking the line to Niagara’s 40-yard line where they lost it on downs. At this point it seemed that Niagara would score for by line bucking and end plays they placed the ball on Buffalo’s ten-yard line. A score seemed a certain but Buffalo held. The University of Buffalo then began an advance by slow stages that was ended only when Cannon went over the line for a touchdown from which Lawton kicked a goal. There- was nothing doing during the remaining of the half.

In the second half Turnbull replaced Boyer at right end. His presence gave the visitors considerable confidence for they played with a dash and vim that could not be denied. Shortly after the beginning of play in the second half something happened which warmed the hearts of the supporters of Niagara University. Buffalo kicked off and the ball was returned 10 yards. Bennis went through the line for four yards and O’Rourke gained half that distance through right tackle. Moore made it the first down-by going through a hole in his side of the line. On the next play the ball was fumbled by Niagara. It was a lucky fumble however as Bennis was on the ground. He did not fall on the ball but tucked it snugly under his elbow end started down the field. Unaided and unassisted by interference he made one of the most brilliant runs ever seen on the Varsity gridiron. A touchdown seemed imminent but Quarterback Lane by excellent sprinting brought Bennis to the grass oh Buffalo’s 12-yard line. On a plunge through left tackle the ball was advanced three yards. Burke was called upon for the final effort and he was successful in making the touchdown. The ball was downed at such an angle that a try for the goal would be impossible so it was decided to kick the ball out which was done the ball being caught by O’Rourke. Burke kicked a clever goal. That tied the score and the Niagara rooters availed themselves of the opportunity to cheer up a few. At this point Niagara made the one serious mistake of the game. It was optional with the team making the touchdown which team kicked off. With the wind against them the Niagaras elected to kick off thus giving the ball into possession of Buffalo. After several gains the ball was given to Turnbull and by a splendid run around right end be placed the ball on Niagara’s three-yard line. Niagara fought desperately but was unsuccessful in withstanding their opponents rushes the ball being carried over for the second touchdown by Racey. Lawton kicked the goal making it Buffalo 10, Niagara 6. Buffalo scored another touchdown before the close of the hall in which Turnbull figured prominently. After several short gains Niagara held and on the third down Quarterback Lane punted. The ball went into the air and dropped just back of Niagara’s line. Burke fumbled and Turnbull who seemed to be everywhere secured the oval and by a splendid run landed it on Niagara’s ten-yard line. Bachman then took it through right tackle for three yards and Racey added two more through the same side. Bachman by another line plunge put it on the one yard line and Cannon took it over for a touchdown through the right side. The try at goal was a failure. Score 17 to 6 in favor of Buffalo. Buffalo kicked off and the ball was returned 30 yards. The Niagaras seemed to take a brace at this point. O’Rourke skirted right-end for 20 yards while Bennis went around left end for five. Buffalo held at this point and Burke punted the ball being caught by Lane. Buffalo tried to gain through the line but met with little success. Captain Lawton punted and Niagara held the ball during the remainder of the half being unable to make any substantial gains the ball being on Buffalo’s 10-yard line at the end of the half.

The Buffalo papers and especially the Buffalo Times seemed to be of the opinion that there would be a fight during the game and they sent down reporters to cover the affair and secure a list of the dead and wounded. They were disappointed for the game was a clean one. This however did not prevent them from stating that the contest was a rough one, and that the spectators crowded on the field during the first half. This is an untruth. In the first place, was there ever a game of football played that was not rough? It is not lawn tennis or croquet by any means and if the Buffalo players expected a game of this nature they were mistaken. They had to work hard for every inch of ground gained. In reference to the spectators crowding on the field there was never a game at Niagara where the field was kept as free of spectators as Saturday. Father O’Brien had placed a wife around the gridiron and with the assistance of the seminarians and collegians the spectators were kept from the playing space. But one player on the Niagara team suffered an accident. Tracey in the first half dislocated his right elbow and Kennedy was compelled to retire from the game a bad knee bothering him. The only disorderly acts during the entire was a scrap between Captain Lawton and one of his Buffalo subs. They were soon separated. 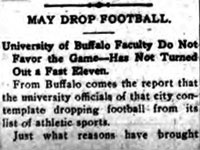 From Buffalo comes the report that the university officials of that city contemplate dropping football from its list of athletic sports.

Just what reasons have brought about such a sentiment at Buffalo are not apparent. Buffalo does not turn out a fast eleven and consequently the student body has not given it the support required. Then again the faculty, almost to a man, are opposed to the game and may abolish it at the institution another year. Taking things altogether the football prospects at the University of Buffalo are not over-brilliant.