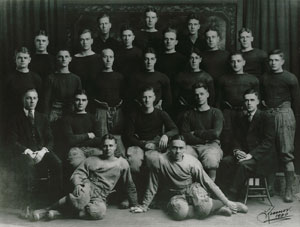 Although the 1920 Buffalo Football team had a rough time of it on the field, it was quite memorable in several respects. First of all, Buffalo played football on their very own field for the first time in its history. The University was slowly starting to migrate the campus from High Street to the property on what is now the South Campus. Prior to the season, a portion of the land between Bailey and Winspear Avenues was leveled, drained and fenced so that U.B. had a football field they could call their own. No longer did they have to play at the Buffalo Baseball Park on East Ferry and Michigan Avenue.

The newly built field was very crude. Fortunately, during the University of Buffalo endowment fund drive, the Rotary Club of Buffalo promised to build a stadium that would equal any in the country. Plans were being formulated and construction was to start soon. 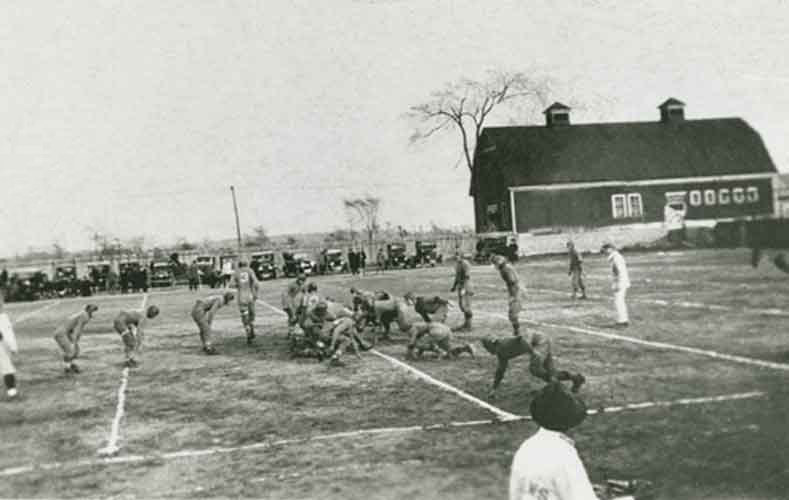 The image to the right labeled “1st Game at Rotary Field” is from the University at Buffalo Archives.  There is no date on the photo so it is unclear if it’s from 1920, the opening of the field, or from 1922, after the stadium seating was built and it officially was named Rotary Field.  Either way it’s an interesting photo. (I especially like the cars in the background.) 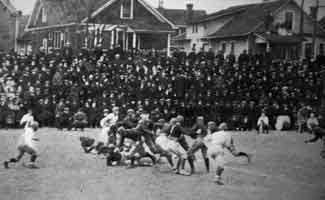 The other “first” for the team was a match against crosstown rivals Canisius College. Granted U.B. was without a football team from 1904-1914 but, prior to 1920, the two teams had never played each other. Finally, after much haggling about which players were eligible and where the game should be played, the two teams lined up against each other on Saturday, November 13, 1920.

The game was played at the Canisius College Villa, located at Main, Jefferson and Hughes streets in the city of Buffalo. The Villa had a seating capacity of 12,000. The students of the two schools displayed unusual interest in the game, each university having a parade down Main street the afternoon before the game. The game would determine the local college championship.

Canisius College was the heavy favorite going into the contest as University of Buffalo had not won a football game all season. But Buffalo coach Art Powell had the U.B. men well prepared for the match. The game was played with all the college trimmings such as bands, cheers and songs, with the colors of both sides waving in profusion from both sides of the field.

Surprisingly, the University of Buffalo came out on top winning by the score of 12-0. (see “U.B. Victorious at Canisius Villa” Buffalo Express, 14 November 1920) The game was well attended and there was talk that football would be a yearly event between the two local institutions.  But for some reason it would be decades before they would play each other again in football. Their next match was on October 15, 1977 when both teams were playing at the Division III level. Canisius beat the U.B. squad 22-8.

Winners went into the conflict second choice, but played brilliantly.

Resumption of football and athletic relations between Canisius College and the University of Buffalo resulted in a gridiron victory for the latter yesterday at Canisius villa by the score of 12 to 0. The game was played with all the college trimmings such as bands, cheers and songs, with the colors of both sides waving in profusion from both sides of the field. And, what is better, the battle went to a finish without a hitch or cross word being spoken, which means that football will be a yearly event between the two local institutions. The first meeting brought out a big crowd which was equally divided.

Both Powell and Bleich, respective coaches, brought out their players in fit condition for a hard struggle and in the opinion of many Powell had the more resourceful eleven, for Canisius soon found itself up against a wall of stone and never was able to advance the ball inside their opponents 30-yard line. The Canisius backfield was very disappointing as it was the fumbling which brought defeat to the villa team. They were looked upon as sure winners because of their victory over a team which had downed U. of B. earlier in the season.