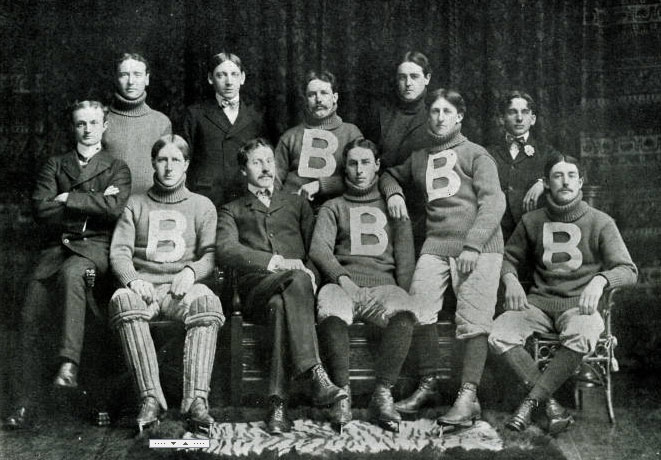 After the U.B. hockey team capped their 1899-1900 season by defeating Cornell University by the score of 10-1 at the Broadway Rink in Buffalo and winning the Buffalo Hockey Association championship, expectations were high for 1900-1901 season. Dr. Wettlaufer, manager of the Buffalo hockey team, received communications from numerous universities in the United States and Canada requesting a match with Buffalo. Cornell, Princeton, Yale, Columbia, Chicago and the University of Toronto were all mentioned as possible opponents. (see “U. of B. Hockey Men Out” Buffalo Express, 1 February 1901)

Unfortunately the ambitious schedule never came to fruition as team after team backed out of prospective games. The first hockey game of any account wasn’t played until late February as the University of Toronto hockey team came down to play Buffalo winning 6-5 in a game played outdoors on Rumsey’s Pond. (see “Buffalo Hockey Team Defeated by Toronto” Buffalo Courier, 23 February 1901) The privately owned pond was in Rumsey Park located at Delaware Avenue and Tracy Street in downtown Buffalo, NY.

The University of Buffalo Hockey team held its first practice game at Rumsey’s skating rink yesterday. A large number of candidates turned out, among whom were Baker, Elliott, Empey, Wyland and Starkhouse of last year’s team. Among the new candidates were Algate, McIntosh, Monro and Swerdferger. The five men mentioned above were the stars of the last year’s successful team and the management is pleased over the prospect of securing them again. Among the other men are a number who have played on Canadian clubs.

Present indications seem to show that the new team will be as good, if not better, than that of last year. The various positions on the team have not been assigned as of yet. The individual players will be watched closely and the best players retained.

If the present plans are carried out Buffalo will see some of the best hockey games to be played In the United States during the winter. It is to be hoped that the sport will be supported better than the football games have been.

Canadians Were Forced to Play For

Every Point – Was a Fast, Clean Game

After a cleverly played game the Toronto University club defeated the local varsity team by a score of 6 to 5 in a hockey contest at Rumsey’s Pond, yesterday afternoon.

The visitors put up a fine game in the first half and had the local men completely puzzled by their methods of team work. But In the second half the Buffalo boys went in for blood. They showed themselves to be as clever and fast as the Canadians. In fact the local boys began such a fusillade of goal shots that the Toronto team was kept almost entirely on the defensive during this half.

Empey and Broder faced off. The Toronto boys immediately set out to “do things,” They coached each other and seemed to have such a peculiar way of passing the puck that the local team was bewildered. The boys from the Canadian city had everything their own way during the first half and when time was called the score stood 6 to 0 in their favor.

Shortly after the face off in the second half Buffalo secured its first score and then the college rooters had their first opportunity, and they certainly took advantage of it. Empey, Stackhouse, Elliott and Collins managed, by the cleverest kind of work, to score one apiece. With the score 6 to 4 in favor of the Canadians the playing became fast and furious. Falls and broken sticks were many, but, strange to say, all players were able to remain in the game.

With but three minutes of play left Empey dribbled the puck down the ice and then by a long high lift placed it between the goal posts for the fifth and last score of the day. Time was called shortly after. Buffalo lost by one point, which, considering the circumstances, is very creditable.

This is the first hockey game of any account that has been played in this city during the present winter, and every available space around the pit was filled with local followers of this exhilarating game.

Two twenty-minute halves were played. J. Wright of Toronto acted as referee and his decisions were never questioned.