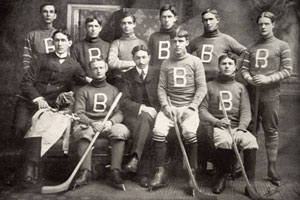 A meeting was held in the Dental Department on January 27, 1902 to consider the advisability of organizing a hockey team for the season. The cause of delay was owing to the fact that suitable accommodations could not be secured at an earlier date. At this meeting it seemed to be the unanimous request of those in attendance that an effort be made to place a team in the field despite the fact that most of last year’s members of the Senior team were ineligible, having graduated from the college. Dr. L. E. Wettlaufer was elected manager with W. W. Algate as assistant manager.

The management made a personal canvass of the different departments obtaining rare, encouraging results. All students having any knowledge of the game responded and practices were held daily at Rumsey’s rink. Under the able coaching of C. E. McIntosh (Capt.) the boys were quickly rounded into form and had the season continued longer, a series of victories would have been accredited to them.

The management labored under many difficulties. They were unable to get a rink where practices could be held outside of college hours and handicapped financially as they received no assistance from the Athletic Association. Hockey is equally as good a sport as football, and why is not a certain portion of their funds appropriated in its behalf?

Many thanks are due to the different members of the team, namely: McIntosh, Murdach, Evans, Snyder, Hill, Munro, Schwerdfuger, Rockefeller, Cantwell, Mooney, Morden and the management who were untiring in their efforts to attain success.

Games were played with Cornell, Cleveland and Toronto Varsity, and it should be the object of all concerned to organize early for the coming season and gain admission into the intercollegiate series. 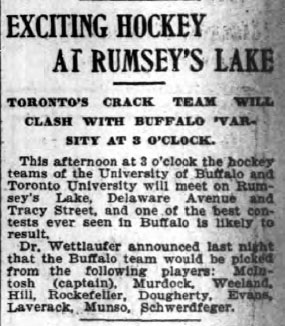 TORONTO’S CRACK TEAM WILL
CLASH WITH BUFFALO VARSITY
AT 3 O’CLOCK.

This afternoon at 3 o’clock the hockey teams of the University of Buffalo and Toronto University will meet on Rumsey’s Lake, Delaware Avenue and Tracy Street, and one of the best contests ever seen in Buffalo is likely to result.