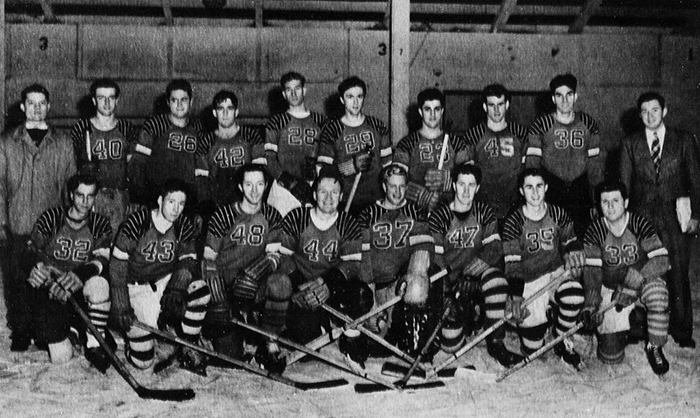 In 1946-1947, after World War II, the students of the University of Buffalo’s School of Physical Education organized a “club” hockey team and called themselves the Mavericks. The team was coached by Wayne Rutter and Mr. Cikurski and played in the Buffalo Municipal Amateur Hockey League. All games were played at the Memorial Auditorium in downtown Buffalo, NY.

Although the club did not have full recognition by the university, it received support in the Buffalo Bee student newspaper. Right-winger Bob Stockton was the mainstay of the University of Buffalo Mavericks playing on a line with Don Bolender and Torgie Fodum.

A late season push for the playoffs ultimately came up short. But the team generated so much interest that is was hoped that it would be placed on a permanent basis and become a full-fledged varsity team playing official intercollegiate games sometime in the near future. 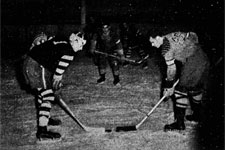 The Senior Division of the Buffalo Municipal Amateur Hockey League during the 1946-1947 season included the U. of B. Mavericks, Red Squirrels, Buffalo Nationals, Big Green of Nichols, South Buffalo, the Universitys, GOP Blueshirts, and the Daly Post.

Unfortunately, the Nationals proved no match for their tournament opponent as they lost to the Hanover (N.H.) Indians, 15 to 3 in their first round engagement. The Hanover team, composed of Dartmouth intercollegiate players, ultimately won the National A.A.U. hockey championship defeating the Boston Athletic Association 6-2 on March 23, 1947.

The Buffalo Amateur Hockey League opened its season yesterday afternoon
at Memorial Auditorium where more than 2,000 spectators watched the
South Buffalos and Mavericks score handy Senior Division victories.
In the preliminary Junior Division contest the A-Z sextet blanked the
Riversides by a 4-0 margin.

The Mavericks, students of the University of Buffalo School of Physical Education,
turned in a classy 6-1 triumph over the North Parks as Bob Stockton
set the scoring pace with two goals and an assist.

The bulky, well-balanced Mavericks pushed two goals through
Bill Turner midway through the opening period and were never threatened.
The lone North Park tally, by Jimmy Higgins, beat the final whistle
by seconds.

Bud Beeny rapped home two goals as the South Buffalo sextet sent the
University’s to a 4-1 defeat. Beeny scored his first goal two minutes
after the opening whistle but Bill Willrich came right back with the equalizer
for the Universitys. Joe Kelly and Frank Craven added payoff shots to
Beeny’s second goal to sew up the contest.

One line, including the Meier brothers and Bob Linehan, accounted
for all the scoring in the A-Z victory over Riversides. Hank Maier
scored two goals, Linehan collected a goal and two assists and Frank
Maier bagged a goal and an assist.

Opening day ceremonies were held before the first Senior Division game.
Included in the official party taking part in the affair were Buffalo
Mayor Bernard J. Dowd, David Mahoney of the Stadium Board,
Director of Recreation Harry Hainsworth, Jack Bredenberg,
president of the Junior Chamber of Commerce and Ernie Brooks,
league director.