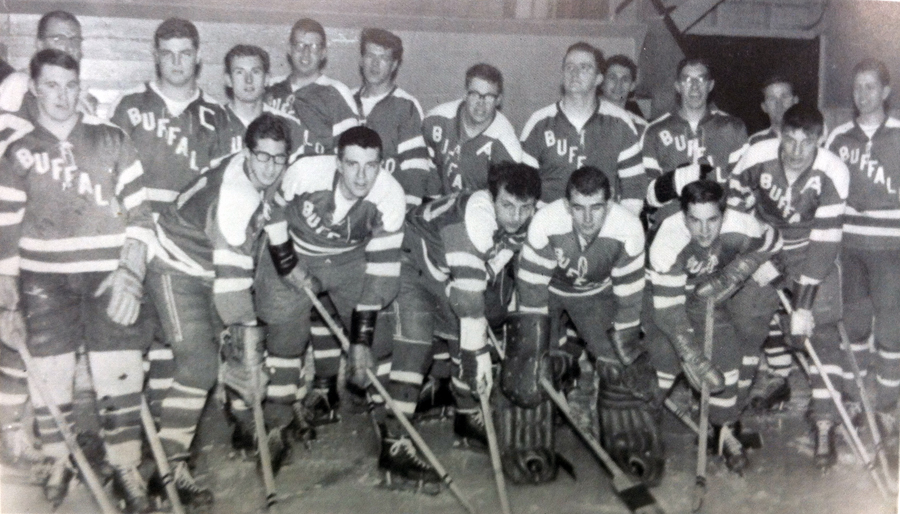 During the 1963-1964 season, the Buffalo Hockey Bulls saw their existence stabilized as they received some financial support from the U.B. Athletics Department and were recognized as a “club” by the Student Senate. The Bulls were also officially accepted into the Finger Lakes Collegiate Hockey League. The League members for 1963-64 were Ithaca College, Syracuse University, University of Rochester, Rochester Institute of Technology, Hobart College and Brockport State.

In early December of 1963, the team received some national press. In the December 2, 1963 issue of Sports Illustrated, the University of Buffalo hockey team was praised in the magazine’s Scorecard section. The club was honored for their purely “amateur” status and a shining example of “what can be done without coaches, athletic scholarships, big budgets and press agents.” (see “Purely Pour Le Sport” Sports Illustrated, 2 December 1963, page 16.)

The team still did not have a local rink to play or practice in so they rented time (usually 11 p.m. to 12:30 a.m.) at the Fort Erie Arena in Fort Erie, Ontario. Despite the unusual obstacles, the team flourished. Coached again by Karl Balland, the Bulls lost only 2 games all year. Both loses came to the Rochester Institute of Technology (R.I.T.), who were the eventual league champions. (see “Icers Place Second” UB Spectrum, 20 March 1964) 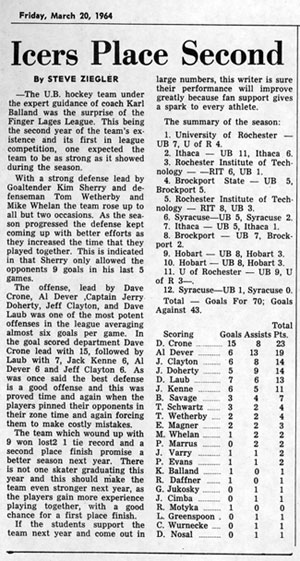 The U.B. hockey team under the expert guidance of coach Karl Balland was the surprise of the Finger Lakes League. This being the second year of the team’s existence and its first in league competition, no one expected the team to be as strong as it showed during the season.

With a strong defense lead by Goaltender Kim Sherry and defenseman Tom Wetherby and Mike Whelan the team rose up to all but two occasions. As the season progressed the defense kept coming up with better efforts as they increased the time that they played together. This is indicated in that Sherry only allowed the opponents 9 goals in his last 5 games.

The offense, lead by Dave Crone, Al Dever, Captain Jerry Doherty, Jeff Clayton, and Dave Laub was one of the most potent offenses in the league averaging almost six goals per game. In the goal scored department Dave Crone lead with 15, followed by Laub with 7, Jack Kenne 6, Al Dever 6 and Jeff Clayton 6. As was once said the best defense is a good offense and this was proved time and again when the players pinned their opponents in their zone time and again forcing them to make costly mistakes.

The team which wound up with 9 won, 2 lost, 1 tie record and a second place finish promise a better season next year. There is not one skater graduating this year and this should make the team even stronger next year, as the players gain more experience playing together, with a good chance for a first place finish.

If the students support the team next year and come out in large numbers, this writer is sure their performance will improve greatly because fan support gives a spark to every athlete.