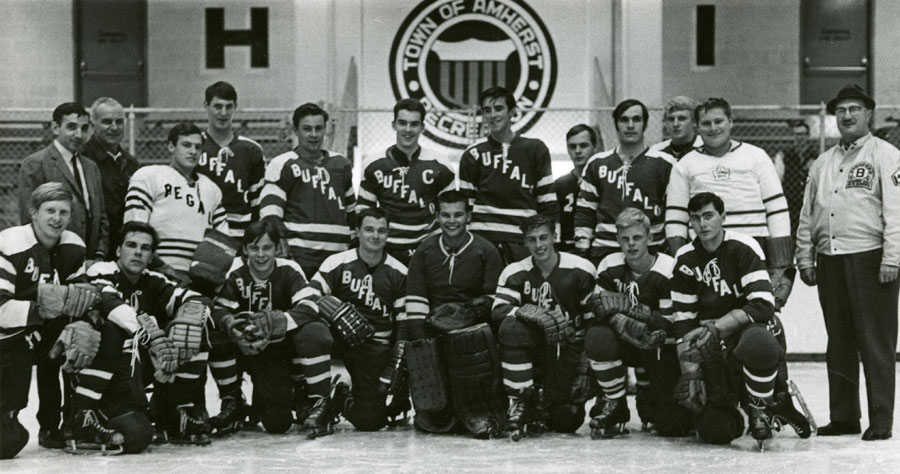 The 1967-1968 Buffalo Bulls Hockey club team had a very good year.  It swept the Finger Lakes Collegiate Hockey League skating to an undefeated regular season with a 15-0 record. Buffalo captain Lorne Rombough was the league scoring champ and goalie Jim Hamilton was All-league and was voted the team’s Most Valuable Player. Strong defensive standouts were Fred Borgemeister and Jim Miller.

Under the fine direction of Coach Trey Coley, the team’s regular season highlight was a 3-2 overtime victory over Oswego State at Oswego, NY.  The game was sold-out six weeks in advance. Buffalo was down 2-1 with 57 seconds remaining in the game when Darryl Pugh scored on a sizzling 15 foot slap shoot sending the game into sudden death overtime. Captain Lorne Rombough scored the overtime winner for Buffalo much to the disappointment of the hockey-happy Oswego crowd. 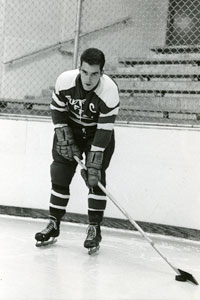 Buffalo goalie Jim Hamilton played his usual outstanding self in net.  Oswego’s defeat was their first loss in 43 games over a 4 year period. Buffalo’s victory was celebrated in the U.B. Spectrum student newspaper as “the university’s greatest glory since the football team’s 1958 Lambert Trophy winning season” and a catalyst for hockey to be played at the varsity level in the coming years. 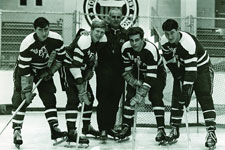 The heartbreaking loss before 1100 screaming fans in the Amherst Recreational Center did not deter coach Trey Coley who was intensely proud of the team. He still considered them one of the best club teams in the country. The tournament trophy for best defensive player went to Buffalo’s goalie Jim Hamilton.  Hamilton made 42 saves against Oswego, many of them in spectacular style.

After graduating, team captain Lorne Rombough, from Fergus, Ontario, would go on to play in ten professional hockey leagues over the course of his long career including a stint with the 1972-73 Rochester Americans of the American Hockey League playing for coach Don Cherry. Lorne came from a hockey family as his younger brother, Doug Rombough, was drafted by the Buffalo Sabres and appeared in 150 games in the National Hockey League with the Sabres, New York Islanders, and Minnesota North Stars. 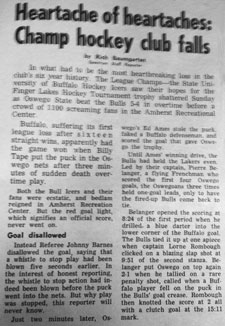 In what had to be the most heartbreaking loss in the club’s six year history. The League Champs — the State University of Buffalo Hockey Icers saw their hopes for the Finger Lakes Hockey Tournament trophy shattered Sunday as Oswego State beat the Bulls 5-4 in overtime before a crowd of 1100 screaming fans in the Amherst Recreational Center.

Buffalo, suffering its first league loss after sixteen straight wins, apparently had the game won when Billy Tape put the puck in the Oswego nets after three minutes of sudden death overtime play.

Both the Bull Icers and their fans were ecstatic, and bedlam reigned in Amherst Recreational Center. But the read goal light, which signifies an official score, never went on.

Instead Referee Johnny Barnes disallowed the goal, saying that a whistle to stop play had been blown five seconds earlier. In the interest of honest reporting the whistle to stop action had indeed been blown before the puck went into the nets. But why play was stopped, this reporter will never know.

Until Ames’ winning drive, the Bulls had held the Lakers even. Led by their captain, Pierre Belanger, a flying Frenchman who scored the first four Oswego goals, the Oswegoans three times held one-goal leads, only to have the fired-up Bulls come back to tie.

Belanger opened the scoring at 8:24 of the first period when he drilled a blue darter into the lower corner of the Buffalo goal. The Bulls tied it up at one apiece when captain Lorne Rombough clicked on a blazing slap shot at
9:51 of the second stanza. Belanger put Oswego on top again 2-1 when he tallied on a rare penalty, called when a Buffalo player fell on the puck in the Bulls’ goal crease. Rombough then knotted the score at 2 all with a clutch goal at the 15:11 mark.

With only 54 second left in the second period, Buffalo’s Johnny Watson gave the Bulls their only lead of the night 3-2, when he stole the puck and cruised in all alone to cleanly beat Oswego’s goalie Dave Kubissa.

Belanger opened up the third period with two quick goals giving Oswego a 4-3 advantage but Darryl Pugh connected for Buffalo with only five minutes left in the game, to set the stage for overtime and Oswego’s winning goal.

Though it was a bitter pill to swallow, the Bulls showed their class. Every player on the Buffalo squad shook hands with the victorious Lakers. For the Oswego players, it was their third straight tournament championship. As was expected, Belanger was named the tourney’s most valuable player. The trophy for the best defensive player was no surprise either. It went to Buffalo’s all-league goalie Jim Hamilton, who was tremendous in the nets. Big Jim made 42 saves against Oswego, many of them bordering on the impossible.

The Buffalo dressing room following the game was quiet. There was more than one pair of misty eyes. For many of the Bulls, next year seemed a long distance away.

The Hockeymen never let up this season. From the first game to the last, the club provided its fans with championship caliber hockey as it swept to the League championship. Led by the League’s top scored Lorne Rombough, the Bulls roared to fifteen straight winds including a 3-2 upset victory earlier this season over the same Oswego Staters.

Sunday night, the Bulls gave it their best Coach Trey Coley, general Manager Howard Flaster and a jam packed crowd at Amherst Recreational Center couldn’t have been any prouder of this team, even if the had won the tournament trophy.