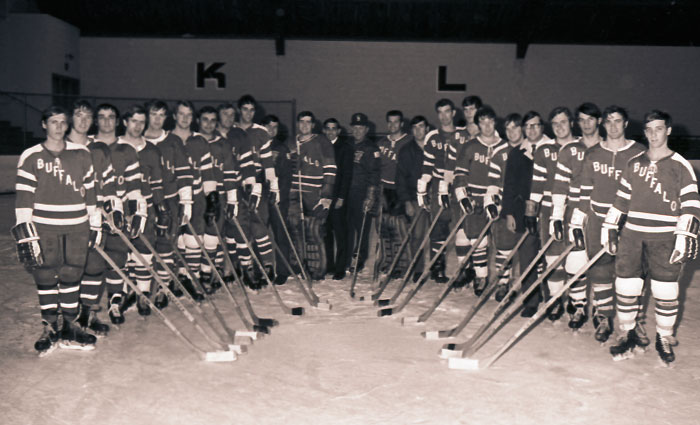 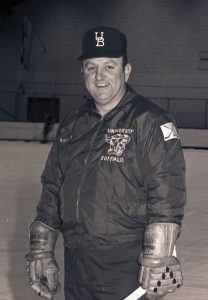 After competing on a club basis since 1962, the Buffalo Bulls’ hockey program finally received “varsity” status on October 29, 1969 with the complete support of the UB Athletic Department.

Al (Bibber) O’Hearn was named its head coach. Howard Flaster was the director of the hockey program. All Bulls’ home games were played at the Amherst Recreation Center.

During the 1969-1970 season, the Bulls competed against teams in Division II of the NCAA Eastern College Athletic Conference (ECAC) and also played opponents from the Finger Lakes Collegiate Hockey League (FLCHL). 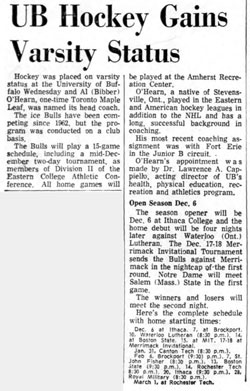 Hockey was placed on varsity status at the University of Buffalo Wednesday and Al (Bibber) O’Hearn, one-time Toronto Maple Leaf, was named its head coach. The ice Bulls have been competing since 1962, but the program was conducted on a club basis. The Bulls will play a 15-game schedule, including a mid-December two-day tournament, as members of Division II of the Eastern College Athletic Conference. All home games will be played at the Amherst Recreation Center.

O’Hearn, a native of Stevensville, Ont., played in the Eastern and American hockey leagues in addition to the NHL and has a long, successful background in coaching. His most recent coaching assignment was with Fort Erie in the Junior B circuit. O’Hearn’s appointment was made by Dr. Lawrence A. Cappiello, acting director of UB’s health, physical education, recreation and athletics program.

The season opener will be Dec. 6 at Ithaca College and the home debut will be four nights later against Waterloo (Ont.) Lutheran. The Dec. 17-18 Merrimack Invitational Tournament sends the Bulls against Merrimack in the nightcap of the first round. Notre Dame will meet Salem (Mass.) State in the first game. The winners and losers will meet the second night.