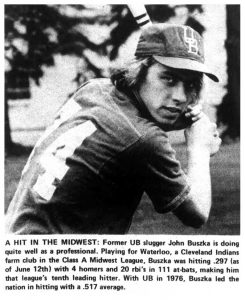 Individually, Buffalo’s John Buszka hit a blistering .517 in 1976 to lead the nation in hitting in NCAA Division I baseball.  The mark still stands as the highest single-season batting average in school history.

When he wasn’t in lineup at first base or DH, Buszka pitched and had an ERA under 3.00 his last two seasons playing for coach Bill Monkarsh.

Buszka was drafted by Cleveland Indians and played three years of minor league ball in the Indians organization.  He is a member of the UB Athletic Hall of Fame and the Western New York Baseball Hall of Fame.

For more information on baseball at the University at Buffalo, visit the UB Sports History Collection website.